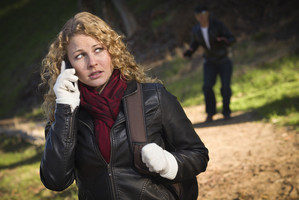 The California legislature has recognized that a person who engages in a persistent pattern of harassing behavior such as pestering, sending unwanted messages, and following another person should be held criminally liable. As a result, stalking is a criminal offense under California Penal Code Section 646.9 PC that can result in serious penalties for those convicted.

In order to prove a charge of stalking, a prosecutor must be able to establish the following elements:

A credible threat is one that causes the target of the threat to reasonably fear for his or her safety, or for the safety of his or her immediate family, and one that the maker of the threat appears to be able to carry out. A credible threat may be made orally, in writing, or electronically or may be implied by a pattern of conduct or a combination of statements and conduct.

Harassing means engaging in a knowing and willful course of conduct directed at a specific person that seriously annoys, alarms, torments, or terrorizes the person and that serves no legitimate purpose. A course of conduct means two or more acts occurring over a period of time, however short, demonstrating a continuing purpose.

A man meets a woman at a bar and is instantly attracted to her. They have a conversation, but the woman makes it clear that she is engaged and she is not interested in the man. The man waits for the woman to leave the bar, and begins to follow her home. The woman notices this, becomes very frightened and calls the police. The man would not be criminally liable for stalking because his behavior only occurred once and did not involve a credible threat.

In a similar example, the same man learns the woman’s phone number and sends her a constant barrage of text messages, including messages that say “you better go out with me or else.” The woman notices the man hanging out around her neighborhood and is frightened by his behavior. In this scenario, the man could be prosecuted for stalking under California Penal Code Section 646.9 PC because he engaged in a harassing course of conduct and made a credible threat to the victim.

Stalking is a "wobbler" offense that can be filed as either a misdemeanor or a felony, depending on the defendant's criminal history and the severity of the stalking behavior. If charged as a misdemeanor, a defendant can face a year in jail and expensive court fines. If charged as a felony, the potential sentence is five years in prison. If the defendant has a previous stalking conviction or if he or she is accused of violating a court protective order, the offense is automatically a felony. In addition, if the defendant is found to have committed the stalking offense as a result of a sexual compulsion or for sexual gratification, he or she may be required to register as a sex offender for life under California Penal Code Section 290 PC.

If you or a loved one have been charged with stalking it is very important that you speak with a Los Angeles Criminal Defense Lawyer immediately. Los Angeles Criminal Defense Attorney Michael Kraut is a former Deputy District Attorney with over 14 years of prosecutorial experience. In many cases, Mr. Kraut is able to intervene early on in the investigation process in order to have charges significantly reduced or rejected altogether. Mr. Kraut is highly respected within law enforcement and prosecutorial agencies for his dedication to his clients and knowledge of the law.