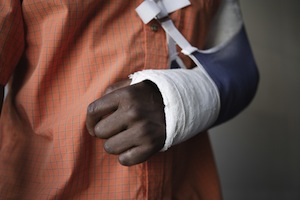 While "simple battery" under California Penal Code Section 242 PC only requires unwanted or unlawful physical contact, no matter how slight, the law recognizes that battery offenses that cause serious injuries should be penalized more severely.

Under California Penal Code Section 243(d) PC, it is illegal to commit any battery that causes serious bodily injury to another. This offense is also referred to as aggravated battery.

To prove that a defendant is guilty of battery causing serious bodily injury, a prosecutor must be able to establish the following elements:

A serious bodily injury means a serious impairment of one's physical condition. Such injuries may include loss of consciousness, concussion, bone fractures, impairment of an organ or body part or a wound that requires extensive stitches.

After an argument in a bar, a man physically strikes the person seated next to him. This other person suffers bruising and soreness, but is fine a couple of days later. The attacker probably would not be prosecuted for battery causing serious bodily injury as the level of injury was fairly minor.

However, if in the same circumstances the victim had a broken bone, or a wound that required extensive stitching, then the defendant would likely be charged with battery causing serious bodily injury.

The law of self defense allows a person to use force to defend themselves or others if faced with a threat of immediate physical harm. This defense would apply even when the act of self defense results in serious bodily injury on another.

If the injury resulted from unintentional physical contact, the defendant could raise the accident defense, because battery causing serious bodily injury only applies to willful acts. However, if the defendant only intended to slightly harm another but the resulting injury was serious, the defendant could still be prosecuted for aggravated battery.

Battery causing serious bodily injury is considered a "wobbler." This means that a prosecutor can file charges as either a felony or a misdemeanor, depending on the factual circumstances surrounding the case and the criminal history of the defendant.

If convicted of battery causing serious bodily injury as a misdemeanor, a person can face up to a year in jail and substantial court fines. If convicted as a felony, the defendant can be sentenced to up to four years in prison.

For those convicted of aggravated battery as a misdemeanor, they would not be able to own or purchase a gun for ten years. If convicted of the felony offense, there would be a lifetime prohibition against gun ownership.

Aggravated battery/battery causing serious bodily injury is a serious offense that can carry extensive consequences for those convicted. If you have been charged with or arrested for this offense, it is critical that you speak with a Los Angeles Criminal Defense Attorney right away. There may be extenuating circumstances that may convince a prosecutor or police officer to reject the case. As a former Deputy District Attorney with over 14 years of prosecutorial experience, Los Angeles Criminal Defense Attorney Michael Kraut is an effective litigator who is highly experienced at defending people charged with battery offenses. Mr. Kraut brings his extensive knowledge and experience to each case he accepts and works hard to ensure the best possible outcome for his clients.