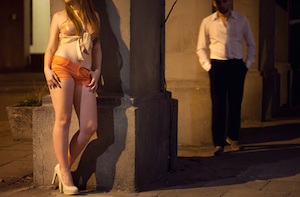 Under California Penal Code Section 647(b) PC, both a person offering to sell sexual services as well as the “john” looking to procure a prostitute can be charged with a Glendale prostitution offense.

To prove that someone has engaged in the act of prostitution, a prosecutor is required to establish that:

The law defines a “lewd act” as an act involving the touching of female breasts or the genitals or buttocks of either the person engaging in or soliciting prostitution, with the intention of sexually arousing or gratifying either person.

There has been a recent increase in sting operations intended to catch those engaging in prostitution as well as those soliciting prostitutes conducted by local law enforcement in the Glendale region. The Glendale Police Department and Los Angeles County Sheriff’s Department will have agents pose undercover as both prostitutes and johns in order to catch those engaging in prostitution. These agencies often post and respond to online advertisements for prostitution services by posing as interested customers.

Those who have been arrested in one of these sting operations and are subsequently charged criminally may have a valid entrapment defense depending on the particular facts of their case. An undercover officer is not supposed to induce someone into engaging in criminal behavior that he or she would not have ordinarily done. If it can be shown that the officer pushed the defendant into committing a crime, that defendant may be able to raise an entrapment defense.

Someone convicted of prostitution in Glendale can be sentenced by a judge at the Glendale Courthouse to serve a maximum jail sentence of six months, in addition to court fines and other terms of probation including education, counseling and AIDS testing. Some offenders may be able to complete a diversion program that would spare them a criminal conviction if successfully completed. When the defendant has one prior prostitution conviction, the judge must sentence the defendant to at least 45 days in jail. When the defendant has two prior convictions, the minimum jail time increases to 90 days. A prostitution offense can also result in a driver’s license suspension if the offense occurred in a vehicle within 1,000 feet of a private home. Instead of a 30 day hard suspension, the sentencing judge can allow the defendant to get a restricted license which would let the defendant drive to work and back home.

If you have been cited for a Glendale prostitution offense or have been charged criminally, it is imperative that you consult with a Glendale Criminal Defense Attorney right away. As a former Deputy District Attorney with over 14 years of prosecutorial experience, Glendale Criminal Defense Lawyer Michael Kraut knows how to effectively fight prostitution charges. Mr. Kraut recognizes the devastating effects a prostitution charge can have on personal and professional lives and works tirelessly to ensure his clients’ rights are absolutely protected. Mr. Kraut is able to make court appearances on behalf of his clients so that they do not have to personally appear before a judge.