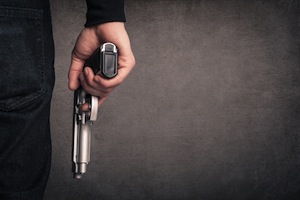 In order to prove that a defendant is guilty of attempted murder, a prosecutor must establish the following elements:

A direct step requires something more than just planning or preparing to commit murder or arranging for someone else to commit murder. A direct step is something that goes beyond the planning stage and shows that the defendant is putting his or her plan into action. This direct step shows a definite and unambiguous intent to kill and is a direct movement toward the commission of a murder after preparations are made. A direct step is considered an immediate step that puts the murder plan into motion so that the plan would have been carried out if some outside circumstance had not interrupted the attempt.

Someone would be guilty of attempted murder even if he or she abandoned further efforts to commit the crime, as long as he or she took a "direct step" towards completing the murder.

A husband learns that his wife is cheating on him and buys a gun with the intent to shoot and kill her lover. The husband approaches this other man at his home and fires several shots in his direction, however all of the shots miss and the man is in no way injured. The husband in this scenario could be charged with attempted murder in violation of California Penal Code Section 664/187 PC because he intended to kill the other person and took a direct step in doing this. The fact that the victim was not harmed because all the bullets missed their target would not be relevant.

In a similar example, the husband learns that his wife is cheating on him and intends to beat up her lover. The man buys a baseball bat and confronts this other man. The husband beats the man severely with the bat and causes internal and external injuries, some of which are permanent. The husband probably would not be charged with attempted murder, because he intended to only harm the victim. However, if he was aware that death would be a natural and expected result of his actions, then attempted murder charges would be appropriate. The husband could, of course, be charged with other offenses, such as mayhem pursuant to California Penal Code Section 203 PC or assault with a Deadly Weapon in violation of California Penal Code Section 245(a)(1) PC.

In some cases, a defendant may have used deadly force in an effort to defend himself or another person. In these instances, there would be a valid self defense claim to any subsequent attempted murder allegation.

Attempted murder is always a felony level offense. If the underlying murder attempted was classified as first degree murder, which requires that the attempt was willful, deliberate and premeditated, a defendant can be sent to prison for life with the possibility of parole. If the underlying murder charge did not involve a willful, deliberate or premeditated attempt on someone's life (i.e second degree murder) the defendant can be sentenced to up to nine years in prison on the attempt.

Attempted murder is a serious criminal offense that carries severe penalties if convicted. As a result, it is crucial that you speak with an experienced Los Angeles Criminal Defense Attorney immediately if you or someone you know have been charged with this offense. As a former Deputy District Attorney with over 14 years of prosecutorial experience, Los Angeles Criminal Defense Attorney Michael Kraut is highly respected as a skilled advocate who has extensive experience handling serious felonies.