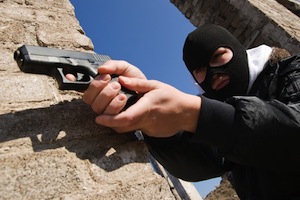 The California legislature has recognized the serious risk associated with shooting firearms into houses, cars or other places where people reside. Bullets can travel through walls and often cause unintended consequences for completely innocent victims. As a result, shooting at an inhabited dwelling or occupied car under California Penal Code Section 246 PC is a felony-level offense that can send someone to prison for a long time.

To prove someone guilty of shooting at an inhabited dwelling or occupied car, a prosecutor must be able to establish the following elements:

Someone acts maliciously when he or she intentionally does a wrongful act or acts with the intent to disturb, defraud, annoy or injure someone else.

A house or building is inhabited as long as some uses it as a dwelling whether or not someone is actually inside it at the time of the shooting.

The firing of a firearm within a house or other dwelling does not constitute a violation of California Penal Code Section 246 PC, however, shooting from inside an apartment into the apartment below would violate the statute.

Someone can be charged with shooting at an inhabited dwelling even if they did not personally shoot the firearm, as long as they aided and abetted a shooting.

In order to scare a rival, a group of young men drive past the rival’s house and one person shoots at the house. No one is home at the time. The entire group could be charged with shooting at an inhabited dwelling even though there was only one shooter.

In another example, a man is cleaning his firearm when it accidentally discharges. The bullet goes through the wall into the apartment next door. This man could not be charged with shooting at an inhabited house because his conduct was neither willful nor malicious.

4. Defenses to Shooting at an Inhabited Dwelling or Occupied Car

If the defendant did not intend for the firearm to discharge, he or she could validly raise an accident defense to counter any criminal charges of shooting at an inhabited dwelling or car.

In addition, there may be circumstances in which a valid self defense claim applies if the act of shooting was committed in order to protect oneself of another person from an immediate threat of harm.

Shooting at an inhabited dwelling or occupied car is a felony-level offense that can be punishable by up to seven years in prison. If a victim suffers great bodily injury or dies as a result of the shooting, the defendant could be sentenced to an additional 25 years to life. A conviction for this offense would also trigger a lifetime ban on owning or purchasing firearms.

6. Criminal Defense for Shooting at an Inhabited Dwelling or Occupied Car Cases

Shooting at an inhabited house or car is a serious offense that can carry significant prison sentences. If you or someone you know are under investigation for this offense, it is crucial to consult with a Los Angeles Criminal Defense Attorney as soon as possible. As a former Deputy District Attorney with over 14 years of prosecutorial experience, Los Angeles Criminal Defense Attorney Michael Kraut has handled serious felonies of this nature as both a prosecutor and a defense attorney. Mr. Kraut has extensive experience in handling major felonies, and works tirelessly to ensure his clients receive the best representation possible. Mr. Kraut is highly regarded throughout the court system as a formidable advocate who has a deep knowledge of the law.

For more information about shooting at an inhabited dwelling or occupied car charges, and to schedule your free consultation, contact Los Angeles Criminal Defense Attorney Michael Kraut at the Kraut Law Group located at 6255 Sunset Boulevard, Suite 1520, Los Angeles, CA 90028. Mr. Kraut can be reached 24/7 at 888-334-6344 or 323-464-6453.