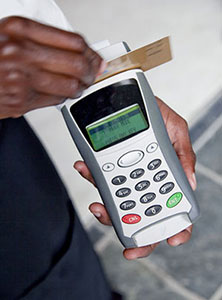 Under California Penal Code Sections 484e, 484f, 484g, 484h, 484i and 484j PC, it is unlawful to commit various forms of credit card fraud. These sections also apply to debit cards and other access cards.

The offenses described as "credit card fraud" may include the following crimes:

A man is stopped by police during a traffic stop and is arrested on an unrelated warrant. During a search of the man’s wallet, the police find numerous credit cards with various different names. The man could be charged with credit card fraud under California Penal Code Section 484e PC even though he had not used the stolen cards. Simply possessing stolen cards is enough to violate the statute.

A mother gives her credit card to her son and instructs him to use it to make a purchase at a store. When the son goes to make the purchase, the cashier becomes suspicious that a man is trying to use a woman’s credit card and contacts the police. The son would not be criminally liable for credit card fraud because he did not have an intent to defraud and he had the consent of the cardholder when he attempted to use the credit card.

Possession of stolen credit cards under California Penal Code Section 484e PC is a “wobbler” offense that can be charged as either a felony or a misdemeanor. If convicted as a felony, the defendant can be sentenced to up to three years in prison. If the defendant only possessed stolen cards but did not actually use them, the offense is considered a petty theft misdemeanor that is punishable by six months in jail.

Forging credit card information under California Penal Code Section 484f PC is a forgery offense that is a “wobbler,” punishable by up to three years in prison.

California Penal Code Section 484g PC (fraudulent use of a credit card) and California Penal Code Section 484h PC (credit card fraud by a retailer) are treated like petty theft misdemeanors if the value of funds stolen was $950 or less, and are punishable by six months in jail. If the amount of theft exceeded $950, these offenses are treated like grand theft and are “wobblers” that can be punished by up to three years in prison.

Possessing a blank card with the intent to turn it into a counterfeit card is a misdemeanor under California Penal Code Section 484i PC that is punishable by up to six months in jail. Altering cards or possessing card counterfeiting equipment is a “wobbler” that can result in a three-year prison sentence.

Publishing credit card information under California Penal Code Section 484j PC is a misdemeanor that can carry a six-month jail sentence if convicted.

If you or someone you know are under investigation for credit card fraud, it is crucial that you discuss your options with a Los Angeles Criminal Defense Attorney immediately. Los Angeles Criminal Defense Attorney Michael Kraut is a former Deputy District Attorney with over 14 years of prosecutorial experience who previously prosecuted white collar offenses as part of the Los Angeles County District Attorney’s Major Fraud Unit. Mr. Kraut is highly experienced at defending these types of charges and knows how to effectively fight credit card fraud allegations.