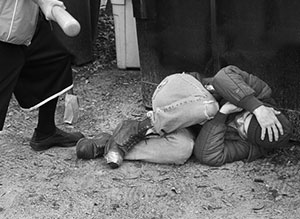 To prove interference with another’s civil rights, a prosecutor must be able to establish the following elements:

Members of an anti-immigrant hate group plan on disrupting a legal assembly held by people who they believe to be immigrants. They find the group and prevent them from conducting the lawful assembly by playing loud music, pushing and shoving people at the assembly and reciting racist chants. The hate group learns later that everyone they thought was an immigrant was actually a lawful U.S. citizen. The individual members of the hate group could be charged with a hate crime under California Penal Code Section 422.6 PC, even if the people they interfered with were not actually immigrants.

A man out drinking sees a same-sex couple leaving a gay bar. The man accosts the couple and viciously beats one of the other men. In addition to battery, the man could be charged with a hate crime enhancement for singling his victim out on the basis of sexual orientation. The enhancement would apply even if the victims were not gay, as long as the defendant thought they were when he attacked them.

A conviction for interfering with a another person’s civil rights under California Penal Code Section 422.6 PC is a misdemeanor that can be punished by up to a year in jail, expensive court fines and up to 400 hours of community service.

For defendants charged with felony offenses, the hate crime enhancement can add an additional three years in prison on top of to any other sentence they receive for the underlying charge.

If you have been charged with a hate crime or are facing a hate crime enhancement, it is very important that you speak with an experienced Los Angeles Criminal Defense Attorney right away. This is a serious allegation that can significantly increase jail or prison sentences. Los Angeles Criminal Defense Attorney Michael Kraut is a former Deputy District Attorney with over 14 years of prosecutorial experience who is highly skilled at handling charges of this nature. Mr. Kraut is highly respected throughout the court system as a passionate advocate who works tirelessly to provide his clients the best defense possible.