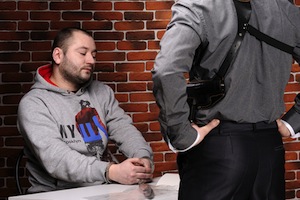 When someone aids a perpetrator of a felony by helping that perpetrator avoid or escape authorities, the person providing assistance is criminally liable as an Accessory After the Fact pursuant to California Penal Code Section 32 PC.

The crime of Accessory After the Fact requires the following elements:

Someone can act as an Accessory After the Fact in several ways including:

In a hypothetical situation, a man is involved in a fatal DUI accident and is concerned that he will be arrested and charged with DUI Vehicular Manslaughter pursuant to California Vehicle Code Section 191.5(a) PC or DUI Murder under California Penal Code Section 187 PC. The man immediately goes to his brother, who owns and operates an auto repair shop. The brother agrees to hide the man in his house and fix the damage to his car. When the police meet with the brother regarding the incident, the brother states that he does not know where the man is. Eventually, the police discover the automobile involved in the crash, but by that time the brother has repaired all damage to the vehicle and removed all evidence of the fatal collision. In this case, the brother would be guilty of being an Accessory After the Fact for concealing the man, lying to police and destroying evidence.

A person is not an Accessory After the Fact if they merely refuse to give incriminating information about someone else when asked by police. Therefore, if a man commits Burglary under California Penal Code Section 459 PC and the police come to interview his girlfriend, the girlfriend is not an accessory if she refuses to tell the police any incriminating information about her boyfriend. However, if she were to lie and provide a false Alibi to explain where her boyfriend was at the time the burglary occurred, she could be subsequently charged as an Accessory after the Fact.

Accessory After the Fact is somewhat similar to Conspiracy under California Penal Code Section 182 PC, in that the people can be punished who are not directly involved in obvious criminal activities. However, Conspiracy typically requires a higher level of involvement in the planning and execution of a crime and is considered a more serious offense than acting as an Accessory after the Fact.

4. Defenses to Accessory After the Fact Charges

In many cases, the person who helps a perpetrator escape or avoid detection is only doing so because the perpetrator has threatened them or their family. In this situation, there would be a valid Duress Defense, as the person provided assistance only to avoid immediate harm.

Additionally, there may be scenarios in which a person unwittingly helps someone without realizing they are actually helping someone escape from arrest or detention, such as a driver who unknowingly picks up a hitchhiker who has just robbed a bank. In this situation, the driver would not be an Accessory after the fact as they lacked the criminal intent required by statute.

Acting as an Accessory after the Fact is a “wobbler” offense, which means that prosecutors can charge this offense as either a felony or a misdemeanor. When making a filing decision, prosecutors will consider the criminal history of the defendant, the facts of the case and the degree of assistance that was provided.

Penalties can include up to a year in jail if the offense is charged as a misdemeanor and up to three years in prison if charged as a felony.

6. Criminal Defense for Accessory After the Fact Cases

Being an Accessory after the Fact in violation of California Penal Code Section 32 PC is a serious offense that may arise out of a seemingly harmless act of charity. People who have never been in trouble before can find themselves suddenly facing felony charges because they thought they were doing the right thing in helping a loved one. Because of the seriousness of this offense, if you are charged with a being an accessory after the fact, it is critical that you have a skilled and knowledgeable defense attorney on your side. Los Angeles Criminal Defense Attorney Michael Kraut is a former Deputy District Attorney with over 14 years of prosecutorial experience who can effectively fight Accessory After the Fact allegations. In many instances Mr. Kraut is able to intervene and work with prosecuting and law enforcement agencies before charges have been filed in order to prevent a criminal filing altogether.