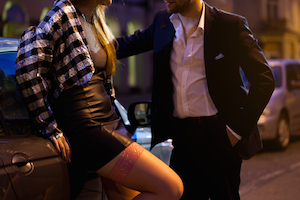 A Burbank prostitution offense can be filed against both those who offer sexual services in exchange for money as well those who seek to purchase these sexual services pursuant to California Penal Code Section 647(b) PC.

In order to convict a defendant of a Burbank prostitution offense, the prosecutor would have to essentially prove that:

Soliciting a prostitute is also illegal under this statute. To convict someone of this offense, the following elements must be proven beyond a reasonable doubt:

A “lewd act” as defined by law is considered the active touching of another person’s genitals, buttocks or female breast with the express intent of sexually arousing either the actor or the other person.

In securing prostitution arrests against both those offering and those seeking prostitution services, law enforcement agencies in the Burbank area will conduct extensive sting operations. Officers from the Burbank Police Department and the Los Angeles County Sheriff’s Department will have undercover units who will pose as prostitutes. They will wait for unsuspecting johns to offer money for sexual favors before arresting the individual and subsequently filing prostitution charges under California Penal Code Section 647(b) PC.

In addition, officers will also set up fake websites or post advertisements on websites popular with those seeking prostitution services. Officer may also answer posted ads and pretend to be potential customers.

Any arrest arising from these sting operations conducted by law enforcement could potentially be subject to a claim of entrapment if the defendant is ultimately charged with a Burbank prostitution offense. Courts have set forth very strict guidelines as to how sting operations can be conducted, and the target of the sting cannot be goaded into committing an act that he or she would not normally have been inclined to do. If the defendant can show that the undercover officer went too far in inducing criminal behavior, he or she may have a strong claim of entrapment.

Burbank prostitution crimes are misdemeanors that would be prosecuted by the Burbank City Attorney. A first time conviction can result in a six month jail sentence in addition to numerous conditions of probation, including classes, mandatory counseling sessions and mandatory AIDS screening.

If the defendant has previously been convicted of prostitution, a subsequent conviction requires imposition of a minimum of 45 days in jail. Having two prior prostitution convictions triggers a mandatory minimum 90 day jail sentence. A conviction for a Burbank prostitution offense can also carry penalties with the DMV. If the offense took place in a vehicle located within 1,000 feet of a private residence, the judge can suspend the defendant’s driving privileges for 30 days. The judge may allow a restricted license during the suspension period that would allow limited travel for employment related purposes.

If you have arrested for a Burbank prostitution crime, it is crucial that you speak with a Burbank Criminal Defense Lawyer as soon as possible. Burbank Criminal Defense Attorney Michael Kraut is a former Deputy District Attorney with over 14 years of prosecutorial experience who is highly respected throughout the Burbank legal community as a tough litigator who knows how to effectively fight prostitution charges.