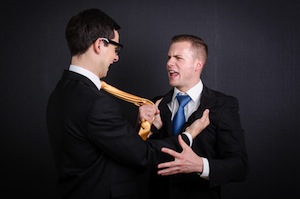 Because they are often used in the same context and have different definitions in different states, many people fail to realize that Assault and Battery are two separate offenses in California. The crime of Battery under California Penal Code Section 242 PC is defined as any intentional and illegal touching of another person that is harmful or offensive. The offense of Assault pursuant to California Penal Code Section 240 PC does not require physical contact, but only requires that the victim was put in fear of unwanted physical contact. The crime of Assault is often viewed as an "Attempted Battery."

There are several criminal offenses that fall into the category of Pasadena Assault & Battery crimes, including:

Most of the offenses listed are "wobblers," which means that prosecutors from the Pasadena City Attorney's Office or the Pasadena Branch of the Los Angeles County District Attorney's Office can file either felony or misdemeanor charges. Factors such as the extent of injuries, circumstances of the assault/battery and criminal history of the defendant usually determine if the crime is charged as a misdemeanor or a felony.

A conviction for an Assault & Battery offense in Pasadena can result in prison or jail sentences, substantial court fines in addition to any restitution amount owed to the victim, lengthy probation or parole terms, required counseling and/or anger management, restraining orders, loss of firearm rights in certain circumstances, and a permanent conviction on one's criminal record. Many of these Pasadena Assault and Battery offenses are considered "strikes" under California's Three Strikes Law and can be used to increase sentences in future convictions. In addition, assault and battery convictions can show up on criminal background checks and can be toxic to employers and landlords.

There are a number of defenses that may apply to allegations of Pasadena Assault and Battery. Under California's Self Defense laws, people are entitled to use force to defend themselves and others, and this defense can be raised if someone is subsequently accused of Battery or a related charge. This is an area of the law in which people sometimes falsely claim to be the victim of an attack in order to get someone else in trouble. In these instances, the defendant would have a valid False Accusation defense. In addition, if the defendant was unwittingly drugged or otherwise harmed someone else as a result of an involuntary action, the defendant could legitimately raise the Involuntary Intoxication / Unconsciousness Defense.

If you or someone you know is under investigation for or has been charged with a Pasadena Assault and Battery offense, it is important that you consult with a knowledgeable and experienced Pasadena Criminal Defense Attorney immediately. As a former Deputy District Attorney with over 14 years of prosecutorial experience, Pasadena Criminal Defense Attorney Michael Kraut is highly skilled at defending clients charged with Assault and Battery offenses. Mr. Kraut formerly served as a Senior Trial Prosecutor at the Pasadena Courthouse and is highly regarded by prosecutors and police officers in the area as an aggressive litigator and tough advocate.

For more information about Pasadena Assault and Battery Offenses, and to schedule your free consultation, contact Pasadena Criminal Defense Attorney Michael Kraut at the Kraut Law Group located at 790 East Colorado Boulevard, 9th Floor, Pasadena, CA 91101. Mr. Kraut can be reached 24/7 at 888-334-6344 or 626-345-1899.