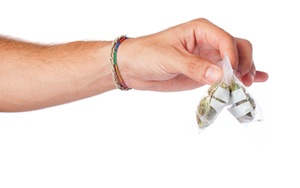 Someone caught possessing less than an ounce (28.5 grams) of marijuana in Glendale could be charged with an infraction, for which the penalty is a $100 fine. Someone caught with an ounce or more of marijuana would be guilty of a misdemeanor offense which carries a maximum punishment of six months in jail. Those charged may be eligible for a diversion program under Proposition 36, which would allow them to avoid having a criminal record if successfully completed.

The offense of possessing marijuana for sale is a felony under California Health and Safety Code Section 11359 H&S which can result in significant prison sentences for those convicted. In order to prove this offense, law enforcement officers in Glendale may use undercover sting operatives to obtain direct evidence of sales, or they may try to build a case with circumstantial evidence. If a person is discovered with large amounts of marijuana that has been separated into baggies or with other items associated with the sale of marijuana such as scales, ledgers or substantial sums of cash, he or she may be prosecuted for possession of marijuana for sale. If convicted, a defendant can be sent to prison for up to four years. If a defendant merely transported marijuana, or gave away less than an ounce, misdemeanor charges may be filed.

The legal system has changed how marijuana offenses are handled after the passage and implementation of Proposition 215 in 1996, which permits those with valid medical prescriptions to possess, grow and use certain amounts of marijuana plants. This is now law under California Health and Safety Code Section 11362.5 H&S. Marijuana that is grown or possessed legally can only be used by the authorized patient, and cannot be sold or given away to someone else.

Although the law now allows certain authorized people to possess and use marijuana, it is still illegal to drive while under the influence of marijuana in Glendale and marijuana patients should be very careful before getting behind the wheel of an automobile. Many law enforcement officers have received special training in how to recognize drug intoxication in drivers, including those under the influence of marijuana. These Drug Recognition Enforcement ("DRE") officers may be summoned if a driver is suspected of drug intoxication. If a blood test reveals the presence of marijuana or other intoxicants, that driver may be charged with Driving Under the Influence in violation of California Vehicle Code Section 23152(a) VC. Unlike those found driving with alcohol in their system, driving while under the influence of marijuana does not trigger an automatic DMV license suspension. However, if the driver is ever convicted in court of DUI, a driver's license suspension would follow.

If you have been charged with a Glendale marijuana offense, it is crucial that you meet with a knowledgeable and effective Glendale Criminal Defense Attorney right away. Glendale Criminal Defense Attorney Michael Kraut is former Deputy District Attorney with over 14 years of prosecutorial experience who is highly respected within the Glendale legal community. Mr. Kraut has worked marijuana cases from both the prosecutorial and defense perspective, and is thus uniquely suited to defend these types of cases.

For more information about Glendale marijuana offenses, and to schedule your free consultation, contact Glendale Criminal Defense Lawyer Michael Kraut at the Kraut Law Group located at 121 W Lexington Dr, Glendale, CA 91203. Mr. Kraut can be reached 24/7 at 888-334-6344 or 818-507-9123.