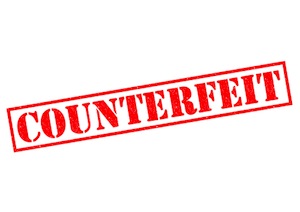 With the high popularity of luxury goods and famous brand names, there exists a large underground market for knock-off products that feature these famous logos and names. However, manufacturing and selling a counterfeit mark is a serious criminal offense under California Penal Code Section 350 PC, and those charged may face felony conviction.

To prove a defendant is guilty of manufacturing or selling a counterfeit mark, a prosecutor must be able to establish the following elements:

Where the offense involves 1,000 or more units of the article and where the retail value of the goods would normally exceed $950, the defendant would face stiffer penalties. Thus those involved in manufacturing or selling fake luxury goods that normally are very expensive can face enhanced punishments.

A man sells inexpensive sunglasses for a living at a mall kiosk. The man wants to make more money so he begins to affix the famous logos and brand names of luxury brands on his stock of sunglasses and sells them at a considerably markup. This man could be prosecuted for manufacturing and selling counterfeit marks in violation of California Penal Code Section 350 PC.

In another example, a woman receives what she thinks is Louis Vuitton purse as a gift from a suitor. The woman decides to sell the purse and posts an online ad with a picture. A man purchases the purse from her and learns that the purse is, in fact, a high quality knock-off. The woman would not be guilty of selling a counterfeit mark if she reasonably believed that the item was genuine.

As described above, there may be instances where the seller of a counterfeit mark has been led to believe that the goods being sold are genuine. In these cases, the seller would have a legitimate mistake of fact defense if charged criminally with manufacturing or selling a counterfeit mark.

If the defendant has a prior conviction for this offense, any subsequent offense can be charged as a felony regardless of the number of units involved or the retail value of the goods.

When the manufacture or sale of goods using a counterfeit mark directly causes death or great bodily injury to another person, this offense is always a felony that is punishable by up to four years in prison.

Police agencies often operate stings to catch people in the act of selling counterfeit products. If you have been arrested or charged with this offense, it is very important that you consult with a knowledgeable Los Angeles Criminal Defense Lawyer right away. Los Angeles Criminal Defense Attorney Michael Kraut is a former Deputy District Attorney with over 14 years of prosecutorial experience who understands how devastating it can be to be charged with a criminal offense like this.