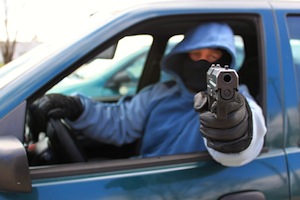 The motor vehicle does not actually have to be in motion for the defendant to commit a drive-by shooting.

A husband learns that his wife is cheating on him with another man and wants to frighten this other man. One evening the husband takes a gun and drives to other man's house, where he parks outside. When the other man steps out his front door, the husband fires a few warning shots in the air to frighten the other man while seated in his parked vehicle. The husband could be prosecuted for shooting from a motor vehicle in violation of California Penal Code Section 26100 PC even though the vehicle was not actually moving at the time of the shooting and even though he only shot in the air and did not aim at the other man.

In another example, a man is out driving his car when he gets a call from his cousin asking for a ride. The man agrees to pick up his cousin. He does not realize that his cousin is carrying a concealed firearm. At one point, the cousin asks the man to slow down when he drives by a particular address. When the man does this, the cousin removes the firearm and shoots at the house. The man would not criminally liable for shooting from a motor vehicle, as he did not knowingly allow his cousin to bring a gun into the vehicle or shoot from his car.

4. Defenses to Shooting from a Motor Vehicle

As discussed above, if the car's driver or owner did not know that his or her passenger was armed with a gun, he or she would not be guilty of a drive-by shooting offense. In addition, there may be circumstances where a driver or owner only allows a passenger to shoot a gun from the vehicle because they were threatened by this passenger. In these situations, the driver or owner of the vehicle would have a valid duress defense.

Furthermore, if the defendant accused of shooting from a motor vehicle only shot as a result of a genuine and reasonable concern for his or her own safety or the safety of another person, that defendant would have a valid self defense claim.

If the defendant is a driver or owner who knowingly allowed another person to carry a firearm in his or her vehicle, that defendant can be charged with a misdemeanor punishable by up to six months in jail.

6. Criminal Defense for Shooting from a Motor Vehicle

If you or someone you know have been charged with shooting from a motor vehicle it is critical that you consult with a Los Angeles Criminal Defense Lawyer as soon as possible. As a former Deputy District Attorney with over 14 years of prosecutorial experience, Los Angeles Criminal Defense Attorney Michael Kraut knows how to effectively defend cases such as this. Mr. Kraut is well-known throughout the court system as a tough litigator who works hard to ensure his clients receive the best defense possible.