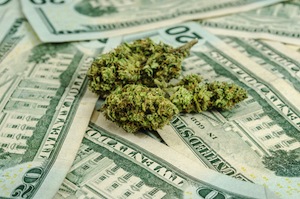 In order to prove a defendant is guilty of selling marijuana, the following elements must be present:

A defendant can be convicted of offering to sell marijuana even if there is no evidence that he or she delivered or ever possessed any controlled substance.

A woman approaches man on the street and asks to buy $10 worth of marijuana. Both are unaware that they are under police surveillance. The man makes the sale and both the man and the woman are detained by police. While the woman would only be cited for possession of marijuana under California Health & Safety Code Section 11357 HSC, which is an infraction, the man could be charged with a felony offense under California Health & Safety Code Section 11360 HSC.

In another example, a man offers to sell another man a small amount of marijuana. The other man refuses. The first man could still be charged with selling marijuana as a felony pursuant to California Health & Safety Code Section 11360 HSC even though he did not actually complete the sale. Even if he never possessed marijuana, he could still be convicted. The mere act of offering marijuana for sale is sufficient to violate the statute.

Many of the arrests for selling marijuana stem from sting operations conducted by undercover law enforcement operatives. If the officer became too aggressive in eliciting a marijuana sale, or pushed the defendant to do something that he or she would not normally have done, there may be a strong entrapment defense to a subsequent criminal charge.

Selling marijuana is always a felony that is punishable by up to four years in prison. However, if the defendant was only transporting or giving away a small amount (28.5 grams or less) of marijuana, the offense is punishable by a $100 court fine.

In contrast to possessing or using marijuana, selling marijuana is a felony offense that can lead to serious penalties for those convicted, including lengthy prison terms. If you or a loved one have been arrested for or charged with selling marijuana, it is very important that you consult with a knowledgeable Los Angeles Criminal Defense Lawyer as soon as possible. As a former Deputy District Attorney with over 14 years of prosecutorial experience, Los Angeles Criminal Defense Attorney Michael Kraut is highly skilled at representing clients charged with marijuana offenses like this. Mr. Kraut is well-known and highly respected throughout the court system for being a tough litigator who possesses an extensive knowledge of the law.