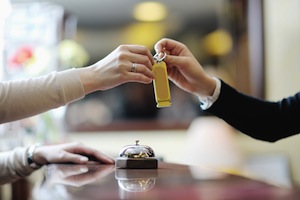 The California Penal Code covers a wide variety of unique theft offenses that apply to specific situations and victims. One example is California Penal Code Section 537(a) PC, which makes it a crime to defraud an innkeeper. This is a serious offense that can be charged as a felony, depending on the value of the theft.

In order to prove a defendant is guilty of defrauding an innkeeper, the following elements must exist:

A man goes to a hotel and claims not to have a credit card to put on file with the front desk. The hotel manager feels bad for the man and waives the credit card requirement. The man stays at the hotel for a week at the rate of $150 a night. After a week, the man leaves suddenly without paying the bill, which is in excess of $1,000. As a result of his actions, the man could be charged with defrauding an innkeeper in violation of California Penal Code Section 537(a) PC.

In another example, a man books a room at an expensive hotel and checks in with the desk clerk. When he sees his room, he is shocked to find the room is filthy and roach-infested. The man goes downstairs and tells the clerk that he will not stay in that room. The clerk tells the man that he is still required to pay for a full night per the hotel’s policy. The man refuses to pay and leaves the premises. This man would not be criminally liable for defrauding an innkeeper as he did not use the services of the hotel nor did he have the required intent to defraud the hotel.

4. Defenses to Defrauding an Innkeeper

As described above, if the defendant did not possess the requisite intent to defraud, he or she would not be criminally liable for defrauding an innkeeper. Additionally, if the defendant was under the impression that his room was being comped, or that he otherwise was not required to pay for it, he may be able to assert a mistake of fact defense.

Defrauding an innkeeper under California Penal Code Section 537(a) PC may be charged as either grand theft or petty theft, depending on the value of the loss suffered by the victim. Misdemeanor petty theft charges would be filed if the value of the loss was $950 or less. On a petty theft conviction, the defendant can be sentenced to serve up to six months in jail, pay costly court fines and compensate the victim for their losses.

If you have been accused of defrauding an innkeeper, it is very important that you consult with an experienced Los Angeles Criminal Defense Lawyer immediately. Los Angeles Criminal Defense Attorney Michael Kraut is a former Deputy District Attorney with over 14 years of prosecutorial experience who knows how best to defend clients charged with theft offenses of this nature.