Home
Crimes by Code Section
California Penal Code Section 402(a) PC: Sightseeing at the Scene of an Emergency

California Penal Code Section 402(a) PC: Sightseeing at the Scene of an Emergency 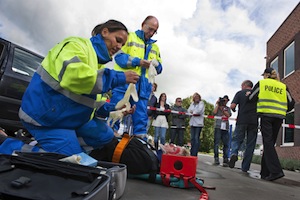 In order to prove that a defendant is guilty of sightseeing at the scene of an emergency, a prosecutor must be able to prove the following elements:

Similar and related offenses include the following:

A man is driving one day when he notices a serious car accident on the side of the road. Instead of driving along, the man stops his car in the middle of the lane and watches the firefighters and other emergency personnel as they try to rescue a man stuck in his turned-over vehicle. Because the man is blocking traffic, other emergency personnel are unable to respond to the accident scene in a timely fashion. This man could be charged with sightseeing at the scene of an accident in violation of California Penal Code Section 402(a) PC.

In another example, a man is driving in traffic when he witnesses a major collision occur in front of him. The man pulls over and stops his car and goes to try to help the victims, as there are no emergency personnel present. Eventually, police, firefighters and ambulance arrive at the scene. This man would not be guilty of sightseeing at the scene of an emergency as he stopped his vehicle in order to provide assistance to the victims.

4. Defenses to Sightseeing at the Scene of an Emergency

There may be situations where a defendant unintentionally finds himself or herself at an accident scene and is unable to leave. In these situations, the defendant would not be guilty because he or she did not intentionally stay at the scene.

Sightseeing at the scene of an emergency is a misdemeanor offense. A defendant convicted of this crime can be sentenced to up to six months in jail and hefty court fines. The court may also require the defendant to complete community service or community labor as a condition of probation.

6. Criminal Defense for Sightseeing at the Scene of an Emergency Cases

If you are facing charges for sightseeing at the scene of an emergency, it is critical that you meet with a Los Angeles Criminal Defense Lawyer right away. As a former Deputy District Attorney with over 14 years of prosecutorial experience, Los Angeles Criminal Defense Lawyer Michael Kraut understands how best to fight allegations of this nature. Mr. Kraut realizes the serious consequences and stigma that a misdemeanor conviction carries, and works hard to ensure his clients receive the absolute best defense possible.