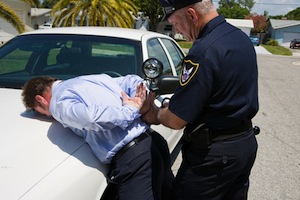 A person is guilty of battery on a police or peace officer when the following elements are present:

If the "touch" results in an injury to the officer, the offense may be filed as a felony. However no injury is required for someone to be convicted of battery against a peace officer, and the slightest touch can be enough to satisfy the statute.

A peace officer is any officer whose primary function is enforcing the law. This can include police, sheriff's deputies, and CHP officers. It can also include uniformed police officers who are working in a private capacity as a part-time private security guard or patrolman. Additional parties who are protected under this statute include firemen, lifeguards, emergency medical technicians, doctors and nurses and prosecutors.

A man commits a burglary offense and accidentally triggers an alarm. He runs down the street and is pursued by police, who eventually catch up with him. While his adrenaline is pumping, the man swings his arms and punches one of the arresting officers. This man could be charged with battery on a police officer and may face felony prosecution if the officer sustained any injuries.

In the same example, the man fleeing police runs into an undercover detective in street clothes as he is making his escape. The man pushes this detective out of the way, causing the detective to fall to the ground and hurt himself. This man probably could not be prosecuted for battery on a peace officer, as he did not know that the other man was actually an officer of the law as he was not in uniform.

4. Defenses to Battery on a Police/Peace Officer

Battery on a peace officer requires that the harm inflicted be willful or intentional. If a peace officer suffers injury during the course of an arrest or other lawful duty, it may be due to an accident. In these situations, a defendant could assert an accident defense.

One can raise a self defense claim in response to allegations of battery against a peace or police officer only when the officer uses unreasonable or excessive force or when the officer is conducting an unlawful arrest on a person.

In addition, this is also an area where false accusations may come up, as officers may fabricate injuries to cause trouble for a criminal suspect that they find particularly offensive. While this type of behavior is rare, it has been known to occur.

Battery on a police or peace officer is a "wobbler" offense that can be filed as a felony or misdemeanor, depending on the factual circumstances and the defendant's criminal history. When the officer has not sustained any injuries, the offense will typically be filed as misdemeanor battery offense that is punishable by up to a year in jail, expensive court finds, community labor and/or service and anger management or other programming.

If convicted of battery against a police/peace officer as a felony, the defendant can be sentenced to up to three years in prison, fines of $10,000 and a possible "strike" if the injury constituted great bodily injury or if the offense involved a weapon. Under California's Three Strikes Law, a strike can be used to increase the penalties on future convictions.

6. Criminal Defense for Battery on a Police/Peace Officer Cases

If you have been charged with battery on a police peace officer, it is important that you consult with a Los Angeles Criminal Defense Attorney right away. Los Angeles Criminal Defense Attorney Michael Kraut is a former Deputy District Attorney with over 14 years of prosecutorial experience who can aggressively fight charges of this nature. Mr. Kraut is highly respected throughout the court system for his legal knowledge and impressive litigation skills.