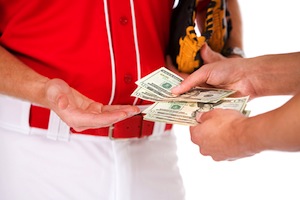 Professional and amateur sporting competitions are extremely popular events that bring in billions of dollars each year. These competitions rely on the integrity of the sport in order to maintain any legitimacy. This legitimacy would disappear if participants in the sport were being paid to lose intentionally or otherwise change their level of play. As a result, bribing a player or participant to throw a sporting event is illegal under California Penal Code Section 337b PC and conviction can result in lengthy prison sentences.

To prove that the defendant bribed a player or participant to throw a sporting event, a prosecutor must be able to establish the following elements:

A man is a gambler who sees an opportunity to make a significant amount of money by betting against a certain fighter who is favored to win. The man approaches the boxer and offers to pay him $100,000 if he “throws” the boxing match and loses in the fifth round. The gambler then bets against the boxer, who is heavily favored. The gambler could be charged with bribing a player/participant to throw a sporting event in violation of California Penal Code Section 337b PC.

In another example, a gambler approaches a boxer before a big fight. The man has bet heavily on the boxer and wants him to win. The man tells the boxer that he will pay him a substantial bonus if he is successful in his upcoming fight. The gambler would not be criminally liable under California Penal Code Section 337b PC, because he did not bribe the boxer to throw the fight, but instead offered him extra incentive to win, which does not violate this statute.

4. Defenses to Bribing a Player/Participant to Throw a Sporting Event

As discussed above, an individual would not be guilty of this offense if he or she offers to give something of value to a player or participant to induce him or her to be successful in their contest. This statute only applies to bribes meant to induce someone else to throw a match, game or contest.

In addition, there may be circumstances in which a sting operation is conducted by law enforcement to catch people in the act of making bribes. If the law enforcement operative becomes overly aggressive in their attempts to induce a bribe, the defendant may ultimately have a strong entrapment defense if charged criminally.

6. Criminal Defense for Bribing a Player/Participant to Throw a Sporting Event Cases

If you or someone you know have been charged with bribing a player or participant to throw a sporting event, it is crucial that you consult with a Los Angeles Criminal Defense Lawyer immediately. Los Angeles Criminal Defense Attorney Michael Kraut is a former Deputy District Attorney with over 14 years of prosecutorial experience who knows how to proactively attack cases like this. Mr. Kraut is well-known throughout the court system as a tough litigator who fights passionately on his clients’ behalf in order to make sure their rights are absolutely protected.

For more information about bribing a player/participant to throw a sporting event, and to schedule your free consultation, contact Los Angeles Criminal Defense Attorney Michael Kraut at the Kraut Law Group located at 6255 Sunset Boulevard, Suite 1520, Los Angeles, CA 90028. Mr. Kraut can be reached 24/7 at 888-334-6344 or 323-464-6453.