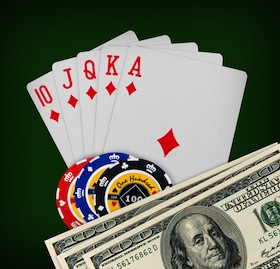 With the popularity of televised poker tournaments and the expansion of establishments that are allowed to conduct gaming operations, gambling is more widespread than it ever has been before. However, despite the popularity and even acceptance of gambling, this activity is prohibited by law in certain situations. Under California Penal Code Section 330 PC, gaming is illegal and can expose those convicted to criminal penalties.

To prove a charge of gaming, a prosecutor must be able to establish the following elements:

Social poker games may be permissible as long as there is no “rake” that is taken from a percentage of the bets placed. If this exists, the game would be considered a percentage game and thus impermissible under California Penal Code Section 330 PC.

A man runs a weekly poker game at his house that soon gains a reputation for taking high-stakes bets. The man begins to collect a fee based on a percentage of the bets placed over the course of the night. Because the man began collecting this percentage, he would be in violation of California Penal Code Section 330 PC as he was running a percentage game. This type of gambling is prohibited under the law.

In another example, a man runs a neighborhood poker game featuring low-stakes bets. He does not take any percentage of the bets and derives no profit from the gambling that occurs at his house. This man would not be criminally liable under California Penal Code Section 330 PC because he did not operate a banking or percentage game.

In another example, a church group throws a fundraiser that features charitable poker tables, a raffle and bingo. These activities are all forms of gambling that are conducted on the church grounds, and the church receives a percentage of the money received. The church group would not be criminally liable under California Penal Code Section 330 PC, as charitable groups are permitted to conduct poker games, raffles and bingo in furtherance of the charity.

Social poker games will generally not violate the law, however if the game relies on a “rake” based on a percentage of the bets received, this game would not be permissible. If there is no “rake,” the defendant would not be guilty of gaming under California Penal Code Section 330 PC.

California does permit gambling at charitable events, as long as it is limited to poker, bingo and raffles. Internet based gambling or slots would not be permissible even if conducted by a charity.

Gaming is a misdemeanor level offense and those convicted can be sentenced to up to six months in jail. In addition, a judge may impose several conditions of probation that a defendant would have to complete, including community service and/or labor and treatment for compulsive gambling issues.

If you have been charged under California’s gaming laws, it is absolutely critical that you speak with a knowledgeable and experienced Los Angeles Criminal Defense Attorney as soon as possible. As a former Deputy District Attorney with over 14 years of prosecutorial experience, Los Angeles Criminal Defense Lawyer Michael Kraut understands how best to fight allegations of gaming. In many instances, Mr. Kraut is able to prevent a criminal filing altogether by intervening and meeting with prosecutors and/or law enforcement while charges are still being contemplated. A conviction for gaming can carry severe collateral consequences, including problems obtaining future employment and housing. Mr. Kraut works hard to help his clients avoid these types of consequences.