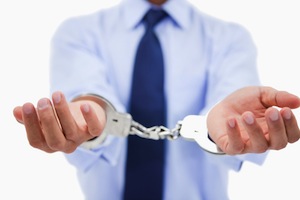 In broad terms, the first offense typically applies to preventing an officer from arresting someone else, while the second involves resisting one’s own arrest.

To establish the first offense, trying to prevent an officer from performing their duties, a prosecutor must establish that:

The second offense, resisting an executive officer, requires a showing that:

Executive officers can include police officers, judges, commissioners and prosecutors.

In a hypothetical situation, a drunk man is walking in the middle of a public street and is aggressively trying to start fights with each person he encounters. A police officer approaches this man and attempts to arrest this man for Drunk in Public pursuant to California Penal Code Section 647(f) PC. The man’s friend sees this, and physically attempts to prevent the officer from performing the arrest by putting the officer in an arm lock. The friend would be guilty of Preventing an Executive Officer from Performing a Lawful Duty under California Penal Code Section 69 PC.

In the same scenario, if the drunk man begins to violently fight and threaten the officer who was lawfully attempting to arrest him, he also could be charged under California Penal Code Section 69 PC for Resisting an Executive Officer.

4. Defenses to Resisting an Executive Officer

It is against the law to resist an executive officer who is lawfully performing his or her duties. However, if an officer commits unlawful conduct, such as using excessive force in making an arrest, there may be a valid Self-Defense claim. That means that if an officer who is performing an arrest of a person who is not resisting suddenly starts to viciously beat this person, the person would be entitled to use reasonable force to protect himself. This is because the officer is no longer acting lawfully within the scope of his duties. However, someone in this situation should act carefully, as it is never a good idea to use any force against an officer executing an arrest.

Resisting an Executive Officer is a “wobbler” offense. This means that prosecutors can charge it as a felony or misdemeanor depending on several factors, such as the circumstances of the incident, the degree of force used, and the criminal history of the defendant.

Penalties include up to a year in jail for a misdemeanor and up to three years in prison for a felony, in addition to substantial court fines and victim restitution.

If you or a love one have been accused of Resisting an Executive Officer, it is critical that you consult with a Los Angeles Criminal Defense Attorney immediately. This can potentially be a serious felony and the early assistance of an experienced defense attorney can make the difference in the ultimate outcome of your case. Los Angeles Criminal Defense Attorney Michael Kraut is a former Deputy District Attorney with over 14 years of prosecutorial experience who is highly respected throughout the court system as a knowledgeable and passionate advocate for his clients. In many instances Mr. Kraut is able to intervene before charges have been filed in order to have charges significantly reduced or even rejected outright.