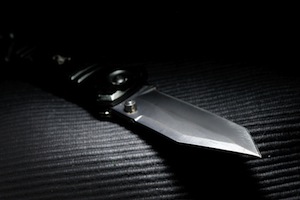 People carrying concealed weapons pose a significant danger to the public at large. As a result, it is illegal to carry a concealed dirk or dagger pursuant to California Penal Code Section 21310 PC.

In order to prove a defendant is guilty of carrying a concealed dirk or dagger, the prosecutor must be able to establish the following elements:

A dirk or dagger is a knife or other instrument with or without a handguard that is capable of ready use as a stabbing weapon that may inflict great bodily injury or death. Most pocketknives and folding knives are not considered to be dirks or daggers unless the blade of the knife is exposed and locked into position.

A knife carried in a sheath and worn openly on the wearer’s waist is not considered to be concealed. It is not necessary that the defendant intended to use the dirk or dagger as a weapon in order to be criminally liable for carrying a concealed dirk or dagger under California Penal Code Section 21310 PC.

A line cook at a restaurant finishes his shift and has a few drinks with his coworkers before driving home. The cook has a paring knife that he takes home with him and carries in his jacket pocket because he lives in a dangerous area and likes having extra protection. The cook is stopped at a DUI checkpoint on the way home and is ultimately arrested for driving under the influence of alcohol. During a search incident to arrest, the police find the paring knife in his jacket, which the cook was wearing at the time of arrest. In addition to the DUI charge, the cook could be charged with carrying a concealed dirk or dagger. The fact that he did not intend to use the knife as a weapon would not be relevant, as long as he knowingly kept it concealed on his person. If the chef had kept the knife on the front seat of his car, or in the trunk, he would not be guilty of this offense.

In another example, a man keeps a folding knife in his pocket, in the folded position. This man would not be criminally liable for carrying a concealed dirk or dagger because folding knives do not fall under the definition of what is a dirk or dagger.

4. Defenses to Carrying a Concealed Dirk or Dagger

If the knife was not concealed, if it was worn in a sheath on the defendant’s waist, or if the knife does not fall under the definition of what a dirk or dagger is, a defendant would not be guilty of this offense.

6. Criminal Defense for Carrying a Concealed Dirk or Dagger

If you have been charged with carrying a concealed dirk or dagger, it is important that you meet with a Los Angeles Criminal Defense Attorney immediately. Los Angeles Criminal Defense Attorney Michael Kraut is a former Deputy District Attorney with over 14 years of prosecutorial experience. Mr. Kraut is highly skilled at defending those charged with weapons offenses and works hard to ensure his clients’ rights are fully protected.