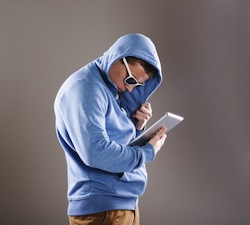 To prove that a defendant is guilty of wearing a mask or disguise to evade the police, a prosecutor must be able to prove the following elements:

A man commits a robbery at a convenience store and is concerned that he will be caught, as his face was clearly seen by store cameras and the store’s owner would be able to describe the man’s appearance. The man puts on a fake beard that he has in his pocket after he leaves the store so that he will not be able to be recognized or identified. This man could be charged with wearing a mask or disguise to evade police in violation of California Penal Code Section 185 PC in addition to any other robbery or burglary offense he may have committed.

In another example a man is at a Halloween party when he gets into an argument with another person at the party. The man physically strikes the other man and knocks him unconscious, then decides to go to a different party. After the man leaves, other guests at the party contact the police to report an assault and battery. While walking to the other Halloween party, the man puts on a mask that is part of his costume. While this man may be charged with assault and battery, he would not be guilty of wearing a mask or disguise to evade police because he did not wear the mask to avoid police detection, but rather only wore the mask because it was part of his Halloween costume.

4. Defenses to Wearing a Mask or Disguise to Evade Police

Wearing a mask or disguise in order to avoid police detection is a misdemeanor offense that is punishable by up to 180 days in jail, community service or community labor, costly court fines and any other conditions of probation that a judge may impose. In addition, the defendant could still be prosecuted for the underlying crime for which they were trying to avoid detection.

6. Criminal Defense for Wearing a Mask or Disguise to Evade Police

If you have been charged with wearing a mask or disguise to evade the police, it is crucial that you speak with a Los Angeles Criminal Defense Lawyer as soon as possible. Los Angeles Criminal Defense Attorney Michael Kraut is a former Deputy District Attorney with over 14 years of prosecutorial experience who possesses the legal acumen and litigation skills necessary to defend those charged with offenses like this. Mr. Kraut works hard to make sure his clients receive the absolute best defense possible.