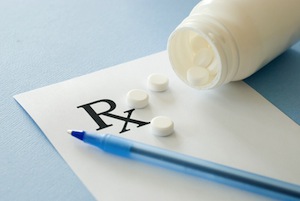 Prescription drugs pose a unique problem for law enforcement agencies, because unlike illegal street drugs, these substances can be lawfully purchased and possessed by those with lawful prescriptions. There may be a temptation by some to forge prescriptions in order to obtain drugs from a pharmacist. Under California Business and Professions Code Section 4324(a) BPC, prescription forgery is a serious criminal offense that can result in felony charges.

In order to prove a charge of prescription forgery under California Business and Professions Code Section 4324(a), a prosecutor must be able to establish the following:

A man has been recently had back surgery and his doctor had prescribed him painkillers while he was in recovery. However, after several months the doctor is concerned that the man is becoming addicted to the painkillers so he decides to only authorize a lower dose and smaller amount of the prescription in order to wean him off of the painkillers. The man is not happy about this, so he takes the written prescription and changes the dose amount and number of refills authorized in order to obtain more of the drug. This man could be charged with prescription forgery in violation of California Business and Professions Code Section 4324(a) BPC.

If you have been arrested for or are facing charges of prescription forgery, it is crucial that you consult with a Los Angeles Criminal Defense Attorney immediately. Los Angeles Criminal Defense Lawyer Michael Kraut is a former Deputy District Attorney with over 14 years of prosecutorial experience who knows how to effectively fight allegations of prescription forgery. Mr. Kraut is highly respected by judges, prosecutors and those in law enforcement and it is often the case that his early involvement in a matter before charges have been filed can potentially result in criminal charges being significantly reduced or even dismissed entirely.