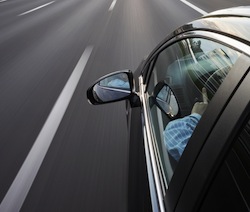 Driving an automobile is an activity that is potentially very dangerous. Cars driven at freeway speeds can suddenly turn into two-ton missiles if the driver loses control. When this happens a driver may be involved in a collision that causes massive destruction to life and property. One of the things that may interfere with a driver’s ability to drive safely occurs when something is thrown at that driver’s vehicle. Given the potential danger associated with this activity, throwing substances at a vehicle is a serious criminal offense under California Vehicle Code Section 23110 VC.

To prove that a defendant is guilty of throwing substances at a vehicle, a prosecutor must be able to establish the following:

To prove a felony-level charge of throwing substances at a vehicle to cause great bodily injury, a prosecutor must show the following:

Under the California Vehicle Code, a “highway” is a way or place of whatever nature, publicly maintained and open to the use of the public for purposes of vehicular travel. A highway would include a street.

A group of young men go to a freeway overpass one night and throw large rocks at vehicles as they pass by. None of the rocks hit their target, however the rocks are so big that they would potentially inflict serious bodily harm if they connected. These young men could be charged with throwing substances at a vehicle causing great bodily injury in violation of California Vehicle Code Section 23110 VC, even though they did not actually hit any cars. The simple act of throwing the rocks at cars travelling on the freeway is enough to violate the statute.

In another example, a man is driving when another driver cuts him off in traffic. The man gets upset and pulls up next to the other driver. When he is close enough, the man rolls down his window and throws a paper cup filled with soda at the other vehicle’s driver side window. The other driver is annoyed but is never seriously endangered by the man’s actions. The man could be charged with a misdemeanor level throwing substance at a vehicle offense under California Vehicle Code Section 23110 VC as his actions did not rise to a level that would potentially cause great bodily injury.

4. Defenses to Throwing Substance at a Vehicle

There may be circumstances when someone is driving a car that suddenly and unexpectedly starts to spray other vehicles with fluids or other automotive substances. In these situations, the driver would have a valid accident defense if charged criminally under California Vehicle Code Section 23110 VC.

Simply throwing a substance at a vehicle on a highway is a misdemeanor offense. Those convicted can be sentenced to serve up to six months in jail in addition to any conditions of probation enforced by the sentencing judge.

If the defendant threw a rock, brick, bottle, metal or other missile, or other substance capable of doing serious bodily harm at a vehicle with the intent to do great bodily harm, he or she can be charged with a felony and can be sentenced to serve up to three years in prison if convicted.

6. Criminal Defense for Throwing Substance at a Vehicle Cases

Throwing a substance at a vehicle may seem like a harmless prank but can end up resulting in serious felony charges in some situations. If you or a loved one have been charged with this offense, it is crucial that you discuss your situation with a Los Angeles Criminal Defense Lawyer right away. Los Angeles Criminal Defense Attorney Michael Kraut is a former Deputy District Attorney with over 14 years of prosecutorial experience who is highly skilled at helping clients charged with crimes like this.