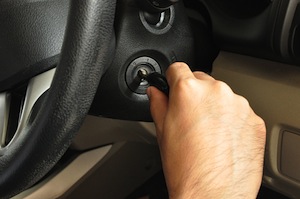 The crime of auto burglary under California Penal Code Section 459 PC prohibits the entry into a locked vehicle with the intent to commit a felony or theft offense. However, there may be circumstances where someone enters an unlocked vehicle or perhaps takes a part of the vehicle or property within the vehicle without the intent to permanently steal these items. In these cases, the defendant may be charged with tampering with a vehicle in violation of California Vehicle Code Section 10852 VC.

In order to prove a defendant tampered with a vehicle, the following elements must exist:

After a night spent drinking with his friends, a man encounters an unlocked vehicle parked on the street while he is walking home from the bar. The man sees several compact discs lying on the front passenger seat and wants to check them out. He opens the unlocked passenger door and flips through the compact discs. However, the man is unimpressed by the musical selection so he throws the discs into the street, leaves the vehicle and returns home. The man could be charged with tampering with a vehicle under California Vehicle Code Section 10852 VC because even though his offense may not rise to the level of auto burglary or vandalism, he still unlawfully entered and removed items from someone else’s vehicle in violation of the law.

In another example, the same man is walking home drunk from the bar when he encounters the same unlocked car. The man is so intoxicated that he opens the backseat of the car, throws up in the interior and passes out. He is discovered by police sleeping in the vehicle the next morning. The man could be prosecuted for tampering with a vehicle in violation of California Vehicle Code Section 10852 VC, unless it can be shown that he was involuntarily intoxicated.

4. Defenses to Tampering with a Vehicle

The crime of tampering with a vehicle requires that the defendant’s actions were willful or intentional. If the defendant’s conduct was inadvertent, such as mistakenly entering someone else’s car while believing that it was actually his, that defendant would have a viable accident defense.

In addition, as described above, there may be circumstances in which a defendant’s intoxication may be a defense, however this would only apply if the defendant was involuntarily intoxicated and thus unconscious of his or her actions.

In contrast to auto burglary and vandalism which can be charged as felonies, tampering with a vehicle is a misdemeanor offense that is punishable by up to a year in jail, a maximum fine of $1,000 and any other condition of probation that a judge may deem appropriate. If the vehicle involved is used by a disabled person, the maximum fine can be $2,000.

6. Criminal Defense for Tampering with a Vehicle Cases

Tampering with a vehicle is a criminal offense that may have occurred as a result of a momentary lapse of judgment but can result in a permanent conviction on someone’s criminal record. If you or someone you know have been charged with this offense, it is critical that you speak with a knowledgeable Los Angeles Criminal Defense Lawyer right away. As a former Deputy District Attorney with over 14 years of prosecutorial experience, Los Angeles Criminal Defense Attorney Michael Kraut is highly skilled at representing clients charged with these types of offenses. In many cases when retained early enough in the process, Mr. Kraut has been able to intervene before charges have been filed in order to get charges significantly reduced and even dismissed. Mr. Kraut is highly regarded throughout the court system as a tenacious litigator who possesses a deep knowledge of the law.