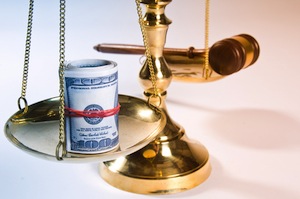 Bribery of a Judge or Juror occurs when someone offers a judge, judicial officer or juror money or something of value in order to influence their official decision in a case. Both someone presenting a bribe and the judge or juror accepting a bribe can be guilty of Bribery.

The crime of Bribery of a Judicial Officer or Juror requires a prosecutor to establish the following:

California Penal Code Section 93 PC prohibits Bribery by a Judicial Officer or Juror and requires that:

Judicial officers can include can include judges, commissioners, jurors, court referees and arbitrators.

“Corrupt intent” refers to trying to gain an unlawful advantage for themselves or others. The advantage could be financial (bribing a judge to rule in the Plaintiff’s favor in a civil lawsuit) or something else (bribing a juror to acquit a Defendant to save that person from prison).

A man has been charged with Homicide pursuant to California Penal Code Section 187 PC and does not want to risk going to prison. During a break in trial proceedings, the man approaches one of the jurors and offers him $1 million if he votes not guilty. If the juror accepts this offer, both the defendant and the juror would be guilty of Bribery of a Judicial Officer under California Penal Code Section 92 PC.

In another example, two parties in a dispute agree to settle their case in arbitration. The arbitrator approaches one of the parties and offers to rule in his favor in exchange for a hefty sum of money. This arbitrator would be guilty of Bribery by a Judicial Officer pursuant to California Penal Code Section 93 PC.

If someone resorts to threats of violence or other coercive tactics to force a judicial officer to rule a certain way, that person may be guilty of Extortion under California Penal Code Section 518 PC.

Bribery of a Judicial Officer and Bribery by a Judicial Officer are felony-level offenses that can carry a prison sentence ranging from two to four years in a California detention facility. Additional penalties include fines, restitution, loss of position and prohibition from ever serving as a judicial officer in the future. Judicial officers convicted of soliciting a bribe would also lose their law licenses or other relevant professional licenses.

If you have been accused of Bribing a Judicial Officer or accepting a bribe, it is critical that you consult with an experienced Los Angeles Criminal Defense Attorney immediately. As a former Deputy District Attorney with over 14 years of prosecutorial experience, Los Angeles Criminal Defense Attorney Michael Kraut is highly skilled at handling sensitive White Collar issues. Mr. Kraut is highly regarded by prosecutors and law enforcement alike for his legal acumen and skills in the courtroom.