California Penal Code Section 653(b) PC: Loitering at a School 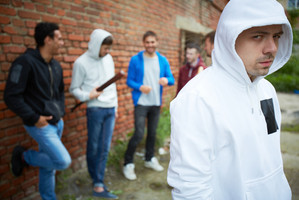 The California legislature has recognized that schools and other places where children congregate are areas that require heightened levels of protection. As a result of these concerns, the legislature enacted California Penal Code Section 653b PC which makes it a criminal offense to loiter in or around a school with an unlawful purpose.

In order to prove that a defendant is guilty of loitering at or around a school, a prosecutor must be able to prove the following elements:

A man is going through a bitter divorce and is upset that he has been denied custody of his minor son. The man intends to take his son from school and leave the state. The man goes to his son’s school and waits in the parking lot so he can take the child as soon as class ends. The man could be prosecuted for loitering at a school in violation of California Penal Code Section 653b PC because he was waiting at the school with the intent to commit child abduction in violation of California Penal Code Section 278 PC.

In another example, a vagrant is caught near school grounds. He explains to school officials that he was simply looking to collect cans to recycle from neighborhood garbage bins. The vagrant would not be criminally liable for loitering near a school because he did not intend to commit a crime, which is required by the statute.

4. Defenses to Loitering at a School

6. Criminal Defense for Loitering at a School

If you or a loved one have been charged with loitering at a school it is very important that you consult with a Los Angeles Criminal Defense Attorney right away. Los Angeles Criminal Defense Lawyer Michael Kraut is a former Deputy District Attorney with over 14 years of prosecutorial experience who is highly skilled at defending individuals charged with offenses like this. In many cases, Mr. Kraut's early involvement in a case can result in the charges being reduced or even rejected altogether. Mr. Kraut understands the potential stigma associated with charges of this nature and is able to make court appearances on behalf of his clients so they do not have to personally appear in court.