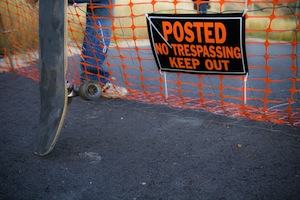 California law recognizes and respects the sanctity of a person’s private property. As a result, it is a crime to enter or remain on another’s property without permission. In these instances, a defendant can be charged with trespassing under California Penal Code Section 602 PC. While there are over thirty forms of trespassing under California law, all adhere to the same basic elements.

In order to prove that a defendant is guilty of trespassing, a prosecutor must be able to establish the following:

A man goes into a private store and begins to pester other shoppers about the store’s use of overseas labor. His actions directly interfere with the store’s ability to conduct business. Store security is called and asks the man to leave the store. The man refuses to leave after he is asked. This man could be charged with trespassing under California Penal Code Section 602 PC, because even though he may have initially had permission to enter the store, he was interfering with business and unlawfully remained after he was told to leave.

In another example a homeless man takes all of the money he obtained from panhandling and goes into a restaurant to purchase a meal. When he enters, the other patrons of the restaurant leave because of his smell and appearance. The man could not be prosecuted for trespassing because even though he may have interfered with the store’s business, he did not enter the store with the intent to do this.

In addition, if the defendant did not “occupy” the property per the trespassing statute, there would no criminally liability. This would occur where a person briefly enters property or otherwise does not interfere with the property owner’s rights or interferes with his business. This could also apply where a person is asked to leave, and is in the process of leaving the property as requested at the time he is arrested. In these circumstances, the defendant would have a strong argument that he or she did not commit trespassing.

The majority of trespassing cases are misdemeanor level offenses. If convicted, the defendant could be sentenced to up to six months in jail, a fine of up to $1000, and summary probation to the court with whatever conditions of probation the judge may deem appropriate. Trespassing under California Penal Code Section 602.8 PC is an infraction that is punishable by a fine. This offense occurs when a defendant willfully enters the land of another without permission and the land is enclosed by a fence or has “no trespassing” signs posted. The fine for a first time violation is $75 and $250 for a subsequent violation when the same property is involved.

If you have been charged with trespassing it is very important that you meet with a Los Angeles Criminal Defense Attorney as soon as possible. As a former Deputy District Attorney with over 14 years of prosecutorial experience, Los Angeles Criminal Defense Attorney Michael Kraut has extensive experience in both prosecuting and assisting clients charged with offenses of this nature. Mr. Kraut is highly regarded throughout the court system as a knowledgeable advocate who fights hard on behalf of his clients charged with trespassing offense. In many cases, Mr. Kraut’s intervention before charges have been filed can prevent a criminal filing altogether.