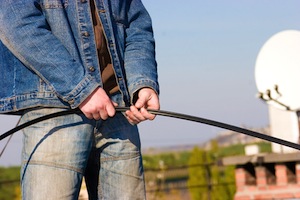 People rely on functioning telephones, electrical and telephone lines to stay connected and ensure emergency response services are never far away. As a result, the act of maliciously damaging these phone or electrical lines under California Penal Code Section 591 PC is a serious criminal offense that can result in lengthy sentences for those convicted. Often, this is an offense associated with domestic violence, but it can also be committed by those attempting to unlawfully acquire electricity.

Mechanical equipment includes a telephone. Someone acts maliciously when he or she intentionally does a wrongful act of when he or she acts with the unlawful intent to annoy or injure someone else.

A man gets into a physical fight with his wife and she threatens to call the police. In response to her threat, the man smashes the telephone in the house. The man could be prosecuted under California Penal Code Section 591 PC for his actions because he maliciously destroyed a telephone.

In another example, a man figures out a way to siphon power from electrical wires in his neighborhood in order to avoid paying steep electric bills. This man could also be prosecuted for maliciously damaging or making an unauthorized connection to electrical lines if he follows through with his plan.

In a final example, a man is having trouble with his cable television reception and the cable company is not giving him proper assistance. The man attempts to fix the cable himself and accidentally severs a line. As a result, everyone in his neighborhood loses their access to cable television. This man would not be criminally liable under California Penal Code Section 591 PC, because while he did sever a line, he did not do this maliciously.

As noted above, there are many instances where someone may inadvertently damage a telephone, cable television or electrical line or connected mechanical equipment and do so without maliciousness. In these instances, a defendant would have a strong accident defense, because they did not intentionally or maliciously damage the line or equipment.

Damaging phone or electrical lines or phone equipment is a “wobbler” offense, which means it can be charged as either a felony or a misdemeanor. In making a filing decision, prosecutors will typically review factors such as the defendant’s criminal history, the extent of damage inflicted, and the purpose behind the defendant’s actions. If filed as a misdemeanor, a defendant can be sentenced to up to a year in jail in addition to fines and restitution. If convicted of this offense as a felony, a defendant can be sentenced to prison for a period of up to three years.

Destroying a phone, phone line or electrical line is a criminal offense that can carry serious consequences for those convicted. If you or a loved one have been charged with this offense, it is very important that you consult with a knowledgeable and experienced Los Angeles Criminal Defense Attorney as soon as possible. Los Angeles Criminal Defense Lawyer Michael Kraut is a former Deputy District Attorney with over 14 years of prosecutorial experience who is highly skilled in assisting clients charged with offenses like this. Mr. Kraut is highly regarded by judges, prosecutors and law enforcement officers alike as a tough, detail-oriented litigator who possesses a deep knowledge of the law.