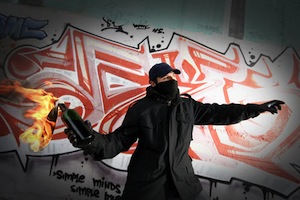 A riot occurs when:

It is not necessary that a previous agreement between the rioters exist. Additionally, a person's mere presence at the scene of a riot does not make that person a rioter.

There is a peaceful protest outside a courthouse during the trial of a man accused of killing a local community leader. The man is acquitted of murder and the peaceful protest begins to turn violent, with members of the group smashing windows, assaulting police and accosting bystanders. The people involved in the acts of violence or threats could be prosecuted for rioting under California Penal Code Section 405 PC under these circumstances. However, members of the peaceful protest who do not participate or facilitate the threats or violent acts would not be criminally liable under the statute, as mere presence at a riot does not make one a guilty of the crime.

Riots can occur under various circumstances, and in recent years have occurred after the announcement of jury verdicts, following sporting events, and during political protests that become out of control.

4. Defenses to Participating in a Riot

As mentioned above, if someone was merely present at the scene of a riot and did not participate in violence or threatening behavior, they cannot be held criminally liable for participating in a riot. This often becomes an issue during political protests that turn violent, when police arrest large masses of people. Only those who act violently can be prosecuted for rioting, though non-violent participants may be guilty of a different offense if they fail to disperse when ordered.

Additionally, there may be circumstances in which a person is entitled to use reasonable force in self-defense to prevent an immediate harm. For example, during a lawful and peaceful protest outside of a corporation, private security guards begin to assault members of the peaceful protest. In these situations, a protester who used reasonable force in self defense would have a valid defense if he or she is ever charged with participating in a riot.

Participating in a riot is a misdemeanor level offense. Someone convicted of participating in a riot can be sentenced to up to a year in county jail in addition to significant court fines. A judge may require additional conditions of probation, such as community service or community labor, staying away from the scene of the riot, and anger management classes or other counseling. In addition, the defendant would have to pay restitution for any damages he or she may have caused through their unlawful actions. A conviction for participating in a riot would remain on a person's criminal record and would be visible to employers, landlords, or any other person conducting a criminal background check.

6. Criminal Defense for Participating in a Riot Cases

If you have been charged with participating in a riot, it is important that you consult with a Los Angeles Criminal Defense Attorney right away. Los Angeles Criminal Defense Attorney Michael Kraut is a former Deputy District Attorney with over 14 years of prosecutorial experience who can aggressively fight charges of this nature. Mr. Kraut is highly respected throughout the court system for his grasp of the criminal law and unmatched litigation skills. Mr. Kraut works hard to ensure his clients receive the best defense possible.