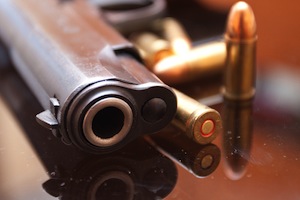 There are several restrictions on gun ownership that apply to the time, place and manner in which firearms may be lawfully possessed. One of these restrictions is reflected in California Penal Code Section 25850 PC, which makes it illegal to carry a loaded firearm in public.

To prove that a defendant is guilty of carrying a loaded firearm, a prosecutor must be able to establish the following elements:

A firearm is any device designed to be used as a weapon from which a projectile is expelled or discharged through a barrel by the force of any explosion or other form of combustion. A Taser would be considered a firearm under the statute, but a pellet gun or BB gun would not.

A firearm is loaded if there is an unexpended cartridge or shell in the firing chamber or in either a magazine or clip attached to the firearm.

A man is hunting with the proper licenses and during hunting season. The area he is in allows hunting and he walks around with a loaded rifle. This man would not be guilty of carrying a loaded firearm because even though he was in public, he was not in an area in which it is illegal to discharge a firearm. Additionally, hunters and other recreational shooters are exempt from prosecution if their activity was otherwise legal.

In another example, a man is alarmed at the rising crime rate in his neighborhood so he decides to walk around with his Taser gun that is charged and fully operational. The man could be charged with carrying a loaded firearm even though a Taser cannot be loaded in the traditional sense. Courts have decided that Tasers are firearms and can be considered “loaded” under California Penal Code Section 25850 PC.

4. Defenses to Carrying a Loaded Firearm

If the defendant did not know that he or she was carrying a firearm, that defendant would not be criminally liable for this offense. However, not knowing that the firearm was loaded would not be a defense.

The following people are exempt from prosecution under California Penal Code Section 25850 PC:

Without additional factors, carrying a loaded firearm is a misdemeanor that is punishable by up to a year in jail and a $1,000 fine.

This offense is a felony that is punishable by up to three years in prison if any of the following aggravating factors exist:

If the defendant has a prior misdemeanor conviction for a crime against a person or property or for a drug offense or if the defendant is not the registered owner of the firearm, this offense is a “wobbler” that can be charged as either a felony or a misdemeanor.

If you have been charged with this carrying a loaded firearm, it is very important that you consult with a knowledgeable and experienced Los Angeles Criminal Defense Attorney as soon as possible. As a former Deputy District Attorney with over 14 years of prosecutorial experience, Los Angeles Criminal Defense Lawyer Michael Kraut knows how best to approach cases like this. Mr. Kraut understands that these types of charges carry serious penalties and fights hard on behalf of his clients charged with gun crimes.