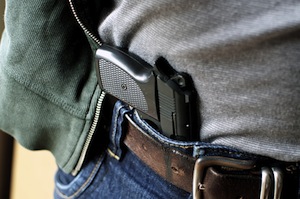 While the Second Amendment to the United States Constitution guarantees a right to bear arms, there are numerous restrictions on this right that are constitutionally valid. One such restriction is reflected in California Penal Code Section 25400 PC, which makes it illegal to carry a concealed firearm on one’s person or in one’s vehicle.

To prove that a defendant is guilty of this offense, the prosecutor must be able to establish the following elements:

A firearm capable of being concealed on a person is any device designed to be used as a weapon from which a projectile is expelled or discharged through a barrel by the force of an explosion or other form of combustion and that has a barrel length of 16 inches or less.

The firearm does not need to be operational or in working order for the defendant to be criminally liable under the statute. Firearms carried in belt holsters are not considered to be concealed.

A man has to walk home from work through a dangerous area so he decides to carry his lawfully owned firearm with him. The man chooses to keep the firearm tucked into his waistband, with his shirt covering the weapon to avoid unnecessary attention. The man could be charged with carrying a concealed firearm in violation of California Penal Code Section 25400 PC even though he lawfully owned and possessed the gun. The fact that he concealed the firearm violates the statute.

4. Defenses to Carrying a Concealed Firearm

A person who is legally entitled to possess a firearm is not considered to be carrying a concealed firearm in a vehicle where the firearm is kept in either the car’s trunk or in a locked container inside the car (but not the glove box).

If the defendant has a California Concealed Weapon (“CCW”) permit, he or she would be exempt from criminal prosecution for carrying a concealed firearm.

In addition, if the defendant was in his or her private home or business at the time that he or she had the concealed firearm, there would be no criminal liability under California Penal Code Section 25400 PC.

Without any aggravating factors, carrying a concealed firearm is a misdemeanor that is punishable by up to a year in jail and a $1,000 fine.

Carrying a concealed firearm is a felony that is punishable by up to three years in prison if one or more of the following aggravating factors exist:

If you or someone you know have been charged with carrying a concealed firearm, it is crucial that you speak with a knowledgeable Los Angeles Criminal Defense Lawyer right away. Los Angeles Criminal Defense Attorney Michael Kraut is a former Deputy District Attorney with over 14 years of prosecutorial experience who has both prosecuted and defended gun cases. Mr. Kraut is highly respected throughout the court system as a skilled litigator who possesses a deep knowledge of the law.