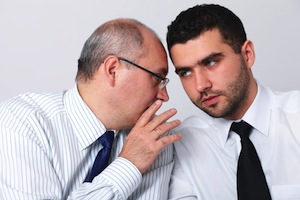 Criminal Courts and the legislature have recognized that crimes where several people are involved in the planning and execution are often more devastating and harder to prosecute than random criminal acts. As a result, California Penal Code Section 182 PC makes it illegal to be part of a Criminal Conspiracy. Conspiracy is a serious, felony-level offense that can carry severe consequences for those convicted.

The crime of Conspiracy pursuant to California Penal Code Section 182 PC requires a prosecutor to prove the following elements:

The overt act does not need to be criminal in nature, and can be as simple as purchasing ski masks before a Robbery or visiting a building to scout its layout prior to a Burglary. A person can be guilty of a Conspiracy charge even if the planned crime is never committed. The act of conspiring to commit the crime is illegal in and of itself.

A man is approached by a group of friends who want to commit Commercial Burglary under California Penal Code Section 459 PC. While the man would not be expected to be part of the group who breaks into the property, he is asked to pay for a hotel room close by that the group can use as a home base. The man agrees and rents the rooms. Even though he does not commit the Burglary, he could be prosecuted for Conspiracy because he entered into the agreement and committed an overt act (renting the room) in furtherance of the crime. It does not matter that the overt act of renting the room is not illegal by itself.

Similar offenses and/or enhancements that deal with the liability of accomplices include:

If there was no agreement to commit a crime, there would be no conspiracy. For example, a group of men are out one night and one member of the group starts beating up random people. If the other members join in, they could each individually be charged with Battery under California Penal Code Section 242 PC but could not be charged with Conspiracy to Commit Battery, as there was no prior agreement.

Additionally if there is no overt act, there is no Conspiracy. In the example described earlier, if the man agrees to help his friends commit the commercial burglary, but does not rent the room or do anything else to assist them, he cannot be charged for Conspiracy under Penal Code § 182 PC as there was no overt act. Simply planning a crime is not itself a Conspiracy.

There may be circumstances where a person in a Conspiracy can withdraw from the group and thus avoid criminal liability. Doing this cannot be passive, and requires the person to affirmatively communicate their withdrawal before someone commits an overt act in furtherance of the crime.

Finally, this is often an area in which False Accusations may be common, especially from other defendants who are looking to diminish their role in any crime or are looking to potentially reduce their sentences. Someone in this situation may be tempted to falsely accuse others of being involved in a Conspiracy.

Participants in a Conspiracy are criminally liable for any crime committed by themselves or by any of the co-conspirators. For someone convicted of Conspiracy to Commit a Felony, he or she can be punished by whatever penalty the underlying felony carries. If convicted of conspiring to commit more than one felony, the defendant could face penalties for the felony with the most severe sentence.

Conspiracy to commit a misdemeanor offense is a "wobbler" which can be filed as either a felony or a misdemeanor. Prosecutors will weigh factors such as the level of involvement in the conspiracy and underlying crime, severity of the offense, and criminal history of the defendant in determining how a case should be filed.

If you or someone you know have been charged with or accused of Conspiracy, it is critical that you consult with a Los Angeles Criminal Defense Attorney immediately. As a former Deputy District Attorney with over 14 years of prosecutorial experience, Los Angeles Criminal Defense Attorney Michael Kraut is highly skilled at defending complex Conspiracy cases. Mr. Kraut is highly regarded throughout the court system as a dedicated advocate and skilled litigator.