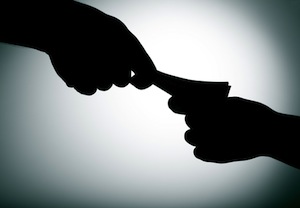 Discouraging a witness or victim from reporting a crime or from testifying about a crime is itself a serious criminal offense under California Penal Code Section 136.1 PC.

In order to prove an allegation of Intimidating a Witness or Victim, a prosecutor must be able to establish the following elements:

Someone is a victim if there is reason to believe that a federal or state crime was committed or was attempted against him or her.

It also does not matter if no one was actually injured or intimidated as a result of the defendant's attempts to prevent a victim or witness from coming forward or cooperating with authorities.

A man has non-consensual sex with a woman he met at a bar and is afraid that she will file a report with the local police and he will charged with a Sex Crime, specifically Forcible Rape under California Penal Code Section 261(a)(2). He approaches the woman and offers to pay her a large sum of money if she agrees not to report him to authorities. This man would be guilty of Dissuading a Victim under California Penal Code Section 136.1 PC, as he attempted to prevent her, a victim, from reporting a crime.

However, in another example a witness is set to testify in a trial involving a large-scale Identity Theft ring run by a notorious organized crime syndicate. The witness is not aware that this particular group has a history of going after witnesses who testify against them. The witness' friend is aware of this reputation, and desperately tries to warn his friend about the dangers of testifying against this particular organization. This friend would not be guilty of Intimidating a Witness, because his actions came from a genuine concern for his friend’s wellbeing, and were not made maliciously as required by the statute.

4. Defenses to Intimidating a Witness or Victim Charges

As in the example above, if someone unintentionally puts a victim or witness in fear by their statements or actions, that person would not be guilty of a crime and would have a legitimate Accident Defense, as they did not realize the effect their words would have.

Additionally, this is an offense in which there may be False Accusations made that someone tried to prevent or dissuade another from testifying or reporting a crime.

Intimidating a Witness or Victim is a "wobbler" offense, meaning that it can be filed as either a felony or a misdemeanor, depending on the facts of the case and the criminal history of the defendant.

However, if any of the following factors exist, the charge must always be filed as a felony:

If filed as a misdemeanor, Intimidating a Witness or Victim can carry a sentence of up to a year in jail and up to a $1,000 fine plus penalties and assessments. In addition, there would be a ten-year ban on the defendant's ability to own or purchase a gun.

If charged as a felony, the defendant could face four years in prison, substantial fines, and a lifetime restriction from owning or purchasing guns.

6. Criminal Defense for Intimidating a Witness or Victim Cases

If you or someone you know has been accused of Intimidating a Victim or Witness, it is critical that you consult with an experienced Los Angeles Criminal Defense Attorney right away. As a former Deputy District Attorney with over 14 years of prosecutorial experience, Los Angeles Criminal Defense Attorney Michael Kraut has handled matters of this nature from a prosecutorial and defense perspective and is able to effectively fight these charges on behalf of his clients. Mr. Kraut has maintained important relationships with law enforcement and prosecutors and is highly respected throughout the court system.