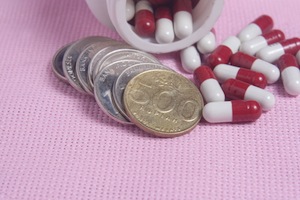 There are situations where a person can be guilty of a drug crime even where no controlled substance was ever involved. Under California Health & Safety Code Section 11355 HSC, it is illegal to sell “substitute substances” or fake drugs. That means the fact that a drug is not authentic would not shield the seller of the substance from criminal liability.

To prove that a defendant is guilty of sale of a substitute substance, a prosecutor must be able to prove following elements:

Selling means exchanging the substance for money, services or anything of value. A person transports something if he or she carries or moves it from one location to another, even if the distance is short.

A person administers a substance if he or she applies it directly to the body of another person by injection, or by any other means, or causes the other person to inhale, ingest or otherwise consume the substance.

A man is at a music festival when he is approached by a young woman. The woman says that she is looking to buy the drug ecstasy. The man does not have any drugs, so he sells an aspirin to the woman for $20 and tells her that it is ecstasy. The woman is as undercover officer and immediately arrests the man. The pill is booked into evidence and tested at the crime lab, where it is discovered that the pill was in fact harmless aspirin. The man could still be prosecuted for sale of a substitute substance in violation of California Health & Safety Code Section 11355 HSC.

In a similar example, the same man is at the music festival when he is approached by another woman who says “I want to take something that makes me feel good.” The man gives the woman an aspirin pill in exchange for $20 without comment. In this situation the man would probably not be guilty of sale of a substitute substance because there was no explicit initial agreement to sell a controlled substance.

4. Defenses to Sale of a Substitute Substance

This offense is often charged following a sting operation employing numerous undercover operatives. If the undercover officer was too aggressive or persistent in his or her actions and actually pressured the defendant into selling a fake drug, the defendant may be able to raise a valid entrapment defense.

6. Criminal Defense for Sale of a Substitute Substance

If you or someone you know have been arrested for or charged with sale of a substitute substance, it is critical that you consult with a Los Angeles Criminal Defense Attorney as soon as possible. As a former Deputy District Attorney with over 14 years of prosecutorial experience, Los Angeles Criminal Defense Lawyer Michael Kraut brings a unique perspective to defending drug cases, including crimes like this. Mr. Kraut is highly respected throughout the court system as an aggressive litigator who fights hard on behalf of his clients.