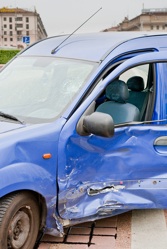 California Hit and Run offenses can either be charged as a felony or as a misdemeanor. Hit and Run offenses involving property are charged as misdemeanors if the value of the loss is under a certain amount. While those causing any injury or death to another person can be charged as felonies. Under California Vehicle Code Section 20001, someone involved in a traffic collision in which another person is hurt or killed is required to perform certain actions. He or she must stop their vehicle and remain at the scene and they must provide identification to the other parties involved and/or law enforcement. Additionally, they are required to provide reasonable help to any injured party, such as calling an ambulance. If the accident resulted in a death, a person is required to immediately contact law enforcement if they are not already at the scene. These requirements apply to all collisions resulting in injuries or death regardless of who is at fault or the extent of the injuries. Often times people are charged with this offense because they believe that they do not need to stop if they were not the person responsible for the accident. This is incorrect. And if caught, they will be charged with a crime.

The sentence imposed for felony Hit and Run convictions under California Vehicle Code 20001 varies depending on the level of injury or if a person was killed. If the accident underlying the Hit and Run resulted in an injury, the charge is considered a "wobbler," which means the prosecutor can charge it as either a felony or misdemeanor. If it is a misdemeanor, a defendant is convicted of a misdemeanor, a defendant could serve anywhere from 90 days to a year in county jail. In addition, they would have to pay all court fines and victim restitution. If it is charged as a felony, an individual may be sent to prison for a period of 16 to 36 months. They will also lose their driver's license.

If the accident underlying the Hit and Run resulted in a serious, permanent injury or death, the prosecutor may elect to charge as a felony. If the charge is a felony, the prison term could be anywhere between 24 and 48 months. Fines and restitution would also apply. Furthermore, if someone is convicted of felony Hit and Run and gross vehicular manslaughter while intoxicated or gross vehicular manslaughter, they will be sentenced to an additional 5 years in prison consecutive to any sentence imposed on the manslaughter case.

There are a number of viable defenses that can be raised to counter an accusation of felony Hit and Run. If the person had no knowledge of their involvement in the collision they cannot be held criminally liable under the statute. This can happen in instances where a driver did not realize that their driving conduct caused a serious accident that resulted in injury or death. Also this may apply when drivers of large vehicles hit someone without even realizing it. Additionally, if someone's abandonment of an accident scene was not willful, they can not be found guilty of the offense. This would apply in situations where a driver must leave the scene for necessity, such as to avoid potential harm by those at the scene of the accident or to rush a passenger to the hospital. Furthermore, if the driver was the only injured party in the accident, they cannot be charged under California Vehicle Code 20001.

Los Angeles Hit and Run Defense Attorney Michael Kraut is an experienced Los Angeles defense attorney who is extremely skilled at Hit and Run defense. As a former Deputy District Attorney, Mr. Kraut use to prosecute these crime and he knows how to present a case to a prosecutor, judge or jury to defend against these charges. He fights tirelessly for his client to ensure the best representation possible.