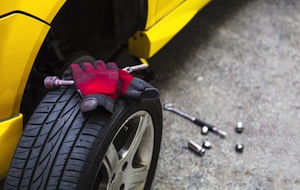 There is a large market for automobile parts, and individual car parts are interchangeable and not easy to identify if stolen. As a result, many car thieves steal automobiles in order to strip them and sell the component parts. This type of activity occurs in what are generally referred to as “chop shops,” and these locations are usually a hive of illegal activity. As a result, owning or operating a chop shop is a serious criminal offense under California Vehicle Code Section 10801 VC that can carry lengthy prison sentences for those convicted.

To prove a defendant is guilty of owning or operating a chop shop under California Vehicle Code Section 10801 VC, a prosecutor must be able to establish the following elements:

A chop shop is defined as a building, lot or other location where:

A man runs a garage in an industrial part of town. Many known car thieves bring him vehicles that they steal. The man pays them for the vehicles and then breaks down and strips the vehicles of their component parts. He then resells these parts to other customers. This man could be prosecuted for operating a chop shop in violation of California Vehicle Code Section 10801 VC.

In another example, a man owns an auto repair shop and employs several mechanics. The man does not know that at night, one of his trusted employees actually uses the garage to break down stolen vehicles. The man would not be guilty of owning a chop shop because he did not knowingly or intentionally own an illegal chop shop.

4. Defenses to Owning or Operating a Chop Shop

As described above, the defendant must intentionally and knowingly own or operate a chop shop in order to be criminally liable under California Vehicle Code Section 10801 VC. Thus if a shop owner is reasonably unaware of the illegal activities going on at his garage, he would not be guilty of this offense. In addition, if the owner or operator is not aware that the vehicles are stolen or are associated with fraud, he or she would not be criminally liable under the statute.

Owning or operating a chop shop is a “wobbler” offense that can be charged as either a felony or a misdemeanor. Prosecutors will generally consider factors like the size of the chop shop operation and the level of involvement of the owner/operator when making a filing decision. If charged as a misdemeanor, a defendant can be sentenced to up to a year in jail and a $1,000 court fine. If charged as a felony, the defendant can be sent to prison for up to four years.

6. Criminal Defense for Owning or Operating a Chop Shop Cases

Owning or operating a chop shop is a serious felony offense that can result in lengthy prison sentences for those convicted. If you have been accused of this offense, it is very important that you speak with an established Los Angeles Criminal Defense Attorney right away. As a former Deputy District Attorney with over 14 years of prosecutorial experience, Los Angeles Criminal Defense Lawyer Michael Kraut is highly adept at assisting clients charged with offenses of this nature. Mr. Kraut is well-known and respected throughout the court system as a knowledgeable attorney who is dedicated to his clients.