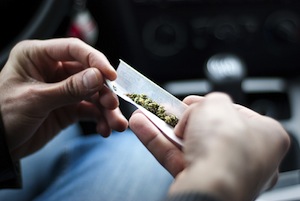 While many of the restrictions regarding marijuana possession have relaxed in recent years, it is still against the law to drive with marijuana (except for those authorized by law to possess it). Under California Vehicle Code Section 23222(b) VC, it is illegal to possess marijuana while driving.

Possessing marijuana while driving under California Vehicle Code Section 23222(b) VC occurs when:

California Vehicle Code Section 23222(b) VC applies to drivers on any public road, and not just freeways or highways as the term is commonly used. This statute would not, however, apply to defendants on private roads or private driveways.

Those who are authorized by law to possess marijuana would be exempt from this statute. That means those who are licensed marijuana caregivers or patients with valid prescriptions can legally transport small amounts (one ounce or less) of marijuana.

The marijuana does not have to physically be on the defendant’s person, and if marijuana is found anywhere in the vehicle, the defendant may be subject to penalties under California Vehicle Code Section 23222(b) VC.

A man is driving home when he is stopped by police for a traffic violation. The man consents to have his vehicle searched and during the search the officer finds a small baggie (less than one ounce) of marijuana in the pocket of the man’s jacket, which he had in his trunk. He admits that the jacket was his but says he forgot he had pot there. The man is not an authorized user. The man could be cited for possessing marijuana while driving under California Vehicle Code Section 23222(b) VC.

In another example, a man has a valid prescription for marijuana and goes to his local dispensary to make a purchase of less than one ounce. The man is driving home when he is stopped by police, who notice the marijuana in plain view on the passenger seat. The man could not be cited for possessing marijuana while driving as he is specifically exempt from prosecution under the statute.

4. Defenses to Possessing Marijuana While Driving

As described above, if the driver is authorized by law to possess marijuana, he or she would not be subject to penalties under California Vehicle Code Section 23222(b) VC. In addition, if the driver did not actually possess the marijuana, and instead it belonged to another passenger in the vehicle, he or she would not be guilty of this offense. Furthermore, if the officer lacked reasonable or probable cause to stop or search the vehicle, the resulting marijuana evidence may be suppressed and the charge would have to be dismissed.

Possessing marijuana in a vehicle is an infraction that is punishable by a $100 court fine, in addition to substantial court costs and assessments. This penalty only applies when the driver is caught with an ounce or less of marijuana. If the driver is found with more than an ounce of marijuana while driving, he or she could be charged with transporting marijuana for sale pursuant to California Health and Safety Code Section 11360 H&S.