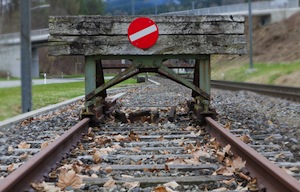 Railroads remain a vital part of our transportation system, both for commercial shipping and personal travel. However, trains can be delayed or even derailed if tracks are damaged or otherwise obstructed. Intentionally injuring or obstructing railroad tracks is a serious criminal offense under California Penal Code Section 587 PC that can result in lengthy prison sentences for those convicted.

To prove that a defendant is guilty of injuring or obstructing a railroad track, a prosecutor must be able to establish the following elements:

A man wants to play a prank so he takes a large branch and places it across a section of railroad tracks, effectively obstructing the tracks. The train is forced to stop and remove the branch before it can move forward. The man could be charged with injuring or obstructing railroad tracks in violation of California Penal Code Section 587 PC.

In another example, a man is driving across a railroad crossing when his car suddenly loses power and stops. The car is positioned directly on the tracks. The man gets out of his car but is unable to move the vehicle from the tracks before the train arrives. The man in this example would not be criminally liable for this offense because he did not maliciously obstruct the tracks, as his car breakdown was not intentional.

In a final example, a man has heard that a train can flatten pennies left on railroad tracks, so he takes a few pennies and positions them on some nearby railroad tracks. The train passes through and flattens the pennies left out. This man would probably not be prosecuted for injuring or obstructing railroad tracks because his action was relatively minor and did not create a meaningful obstruction on the tracks.

As discussed above, a defendant is only criminally liable for this offense if his or her actions were malicious and intentional. Thus, someone who accidentally or even negligently obstructs or injures rail tracks could not be prosecuted for this crime. In addition, the conduct must be significant enough to actually injure or obstruct a train. Thus placing minor obstructions, such as coins, would probably not violate the statute.

Injuring or obstructing railroad tracks is what is considered to be a “wobbler” offense. This means that a prosecutor can charge this offense as either a felony or a misdemeanor. A number of factors may be taken into account when deciding how to file a case, including the severity of damage, if any, caused and the criminal history of the defendant. If the case is filed as a felony, a person convicted of this offense can be sentenced to up to three years in prison. If the case is filed as a misdemeanor, the judge can sentence the defendant to up to a year in jail.

For those accused of injuring or obstructing a railroad track, it is absolutely critical to meet with a reputable Los Angeles Criminal Defense Attorney to discuss the charges. As a former Deputy District Attorney with over 14 years of prosecutorial experience, Los Angeles Criminal Defense Lawyer Michael Kraut is highly skilled at aggressively defending those charged with offenses of this nature. Mr. Kraut understands the severe consequences that a felony conviction may carry and dedicates himself to making sure his clients receive the absolute best defense possible under the law.

For more information about injuring or obstructing railroad tracks, and to schedule your free consultation, contact< a href="/michael-e-kraut-managing-attorney.html">Los Angeles Criminal Defense Lawyer Michael Kraut at the Kraut Law Group located at 6255 Sunset Boulevard, Suite 1520, Los Angeles, CA 90028. Mr. Kraut can be reached 24/7 at 888-334-6344 or 323-464-6453.