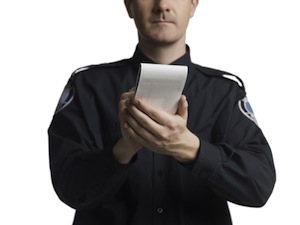 Peace officers carry an extraordinary amount of power in comparison to the average citizen. As a result, there may be situations in which a person who is not a law enforcement officer may pretend to be a peace officer in order to gain access or gain another person’s compliance. However, impersonating a peace officer is a criminal offense under California Penal Code Section 538d PC that can result in serious penalties for those convicted.

To prove that a defendant is guilty of impersonating a peace officer, the following elements must be present:

In addition, uniform vendors who sell law enforcement uniforms to individuals without verifying that the purchaser is an employee of the law enforcement agency can be prosecuted under California Penal Code Section 538d PC. The statute also applies to those who manufacture or sell deceptive police badges.

A man purchases a realistic police uniform and likes to pretend he is an officer of the law, even though he is not. The man walks around downtown while wearing the uniform and threatens to arrest people who are doing things he does not approve of. The man could be prosecuted for impersonating a peace officer under California Penal Code Section 538d PC.

In another example, a man is driving when he gets into a road rage incident with another driver. After the other driver makes an offensive gesture to the man, the man picks up a novelty police badge and flashes it at the driver of the other car. He also motions for the other car to pull over. The man is not a peace officer, however the other driver complies because he believes the badge is real. After the driver pulls over, the man decides to simply drive away. This man could be charged with impersonating a peace officer.

An actor is cast in a role as a police officer and wears an authentic uniform as his costume. The production has received written permission from the law enforcement agency to wear the costume. The actor would not be criminally liable for impersonating a peace officer as use in situations such as this is specifically exempt from prosecution under the statute.

4. Defenses to Impersonating a Peace Officer

As described above, criminal penalties would not apply if the uniform or badge is used solely as a prop or costume for a motion picture, television, video production, or theatrical event and prior written permission was obtained from the identified law enforcement agency.

Impersonating a peace officer is a misdemeanor level offense. Those convicted can be sentenced to up to 180 days in jail, extensive court fines, mandatory community service or community labor and any other conditions of probation that a judge may deem appropriate. In addition, a conviction for an offense of this nature would be reflected on a person’s criminal record and could jeopardize future job or housing prospects.

Impersonating a peace officer is an offense that may have been committed inadvertently or during a momentary lapse of judgment, but can result in a permanent conviction. As a result of this, it is absolutely critical that you consult with a Los Angeles Criminal Defense Attorney as soon as possible if you have been charged with or arrested for this offense. Los Angeles Criminal Defense Attorney Michael Kraut is a former Deputy District Attorney with over 14 years of prosecutorial experience who applies his years of courtroom experience in helping those charged with criminal offenses like this. Mr. Kraut is highly respected throughout the court system and works hard to make sure his clients receive the best defense possible.