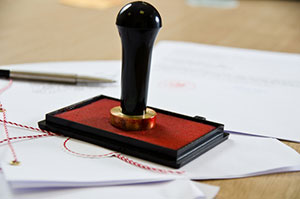 In many instances, the crime of forgery involves using a fake government seal to make the forged document appear official or state-sanctioned. The act of creating or possessing a fraudulent public seal is illegal under California Penal Code Section 472 PC.

In order to prove that a defendant is guilty of forging a government, public or corporate seal, a prosecutor must be able to establish the following elements:

To be convicted of possessing a counterfeit government, public or corporate seal, the following elements must be present:

Someone intends to defraud someone else when he or she deceives that other person to cause a loss of money or something else of value or to cause damage to a legal, financial or property right.

As part of a mortgage fraud scheme, a man uses fake deeds of property to secure loans. These deeds have been created using a high-tech printer and feature an identical copy of the county seal. In addition to charges associated with the fraud scheme, the man could be prosecuted for forging and possessing a fake seal under California Penal Code Section 472 PC.

In another example, a young man is stopped and searched as part of a DUI arrest. The officers find a fake ID in his wallet, that he admits to using to buy alcohol and get into bars. The fake ID has a small state seal in the bottom corner that makes it look more authentic. The man could be prosecuted for possessing a counterfeit seal, in addition to being charged with possession of a fake ID under California Penal Code Section 470B PC. Even though the young man did not intend to defraud anyone in the classic sense of the term, his actions would be considered indicative of an intent to defraud by gaining something he would not normally be able to obtain.

4. Defenses to Forging or Possessing a Fraudulent Public Seal

If the defendant did not have an intent to defraud and actually thought that he or she was dealing with a legitimate document or seal, he would have a valid defense if charged with possessing a counterfeit public seal. Thus, in the fake property deed example listed above, the victims of the fraud who relied on and used the fake deeds of property could not be charged with possessing a fake seal if they legitimately believed the article was genuine.

Both forging and possessing a fraudulent or counterfeit state, corporate or public seal is considered a "wobbler" offense that can be charged as either a felony or a misdemeanor, depending on the specific facts of the case and the criminal history, if any, of the defendant. If convicted as a misdemeanor, the maximum punishment would be a year in jail and costly court fines. If convicted as a felony, the maximum sentence is three years in prison.

6. Criminal Defense for Forging or Possessing a Fraudulent Public Seal

If you or have been charged with forging or possessing a counterfeit public seal it is crucial that you meet with a Los Angeles Criminal Defense Attorney as soon as possible. As a former Deputy District Attorney with over 14 years of prosecutorial experience, Los Angeles Criminal Defense Attorney Michael Kraut has extensive experience in both prosecuting and defending cases like this. Mr. Kraut is known for being a fierce litigator who possesses an extensive knowledge of the law.