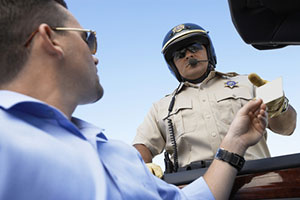 In order to prove a charge of possessing a fake driver's license or ID, a prosecutor must be able to establish the following elements:

A person intends to commit forgery when they intend to use a forged, counterfeit, altered, falsified, duplicated, or reproduced document to deceive another person in order to cause loss or damage to a legal, financial or property right. The fraudulent act itself does not actually need to occur for the crime to be committed.

A person does not have to actually hold or touch the ID to possess it. It is enough if the person exercises control over it.

A young college student wants to be able to get into different bars and clubs so he buys a fake driver's license. He uses it at a local liquor store and is caught by an undercover police officer. This man could be charged with possessing a fake identification card under California Penal Code Section 470B PC. It does not matter if the false driver's license is a counterfeit of a California license or any other state’s license, as possession of any fake ID is subject to prosecution under the statute.

In another example, an undocumented immigrant wants to be able to get a job so he purchases a fake government identification card. Before he has a chance to apply for work, he is stopped by police at a routine traffic stop and the fake ID is discovered during a search. The man could be charged under the statute even though he did not actually use the document when it was discovered. The statute only requires that he intended to use it for a fraudulent purpose.

If the defendant was not aware that the identification was fake, he or she would have a valid defense against any charge of possessing a fake ID. This may apply to people from other places who legitimately are unfamiliar with how California or other government issued IDs actually appear and are told they have a legitimate identification card.

Possessing a fake driver's license or other government issued identification is a "wobbler" offense that can be filed as either a misdemeanor or a felony, depending on the defendant's criminal history and the circumstances of the offense. If charged with a misdemeanor, a defendant can face a year in jail and costly court fines. If charged as a felony, the potential sentence is three years in prison.

If you or a loved one have been charged with possessing a fake driver's license it is very important that you speak with a Los Angeles Criminal Defense Attorney right away. Los Angeles Criminal Defense Attorney Michael Kraut is a former Deputy District Attorney with over 14 years of prosecutorial experience. In many cases, Mr. Kraut is able to intervene early on in the investigation process in order to prevent criminal charges from being filed entirely. Mr. Kraut has established key relationships within law enforcement and prosecutorial agencies and is highly respected for his dedication to his clients and mastery of the law.