Home
Crimes by Code Section
California Penal Code Section 402(b) PC: Interfering with a Lifeguard During an Emergency

California Penal Code Section 402(b) PC: Interfering with a Lifeguard During an Emergency 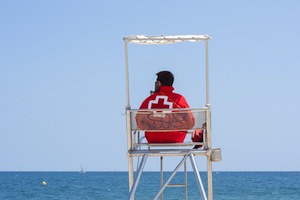 California is renowned for its hundreds of miles of beautiful beaches that attract visitors from all over the world. However, oceans and beaches can be dangerous places, and lifeguards must be able to respond freely to any emergency that may arise. To make sure that lifeguards are not hindered in their job, the California legislature enacted California Penal Code Section 402(b) PC, which makes it illegal to interfere with a lifeguard during an emergency.

To prove that a defendant is guilty of interfering with a lifeguard during an emergency, a prosecutor must be able to establish the following elements:

Under the statute, an emergency includes a condition or situation involving injury to persons, damage to property, or peril to the safety of persons or property. This can result from a fire, explosion, airplane crash, flood, windstorm, railroad accident, traffic accident, power plant accident, toxic chemical spill or any other natural or human-caused event.

A man is at the beach when he notices someone drowning. The lifeguard stationed at the beach is in the middle of responding to the drowning victim when the man stops the lifeguard and demands to know information about his training and how he plans on rescuing the drowning victim. The lifeguard is effectively impeded by this man and is delayed in rendering aid to the victim, who is eventually saved. The man could be charged with interfering with a lifeguard during an emergency in violation of California Penal Code Section 402(b) PC.

In another example, a man is at the beach when he notices a commotion. A man in the ocean is drowning and the lifeguard at the beach is performing an impressive rescue attempt. The man stays on the beach and records the event with his video camera. He does not impede or otherwise interfere with the lifeguard’s ability to perform his duties. This man is not guilty of interfering with a lifeguard during an emergency.

4. Defenses to Interfering with a Lifeguard during an Emergency

If the defendant did not know or did not have reason to know that the lifeguard was engaged in the performance of his or her duties, there would be no criminal liability under the statute. Also, as described above, it is legal to watch and stay at the scene of the emergency, as long as there is no interference with the lifeguard or anyone else offering emergency services.

Interfering with a lifeguard during an emergency is a misdemeanor offense. Those convicted of this crime can be sentenced to serve up to six months in jail and would be ordered to pay costly court fines. Several additional conditions of probation, such as community service or community labor, may also be imposed by the sentencing judge.

6. Criminal Defense for Interfering with a Lifeguard during an Emergency

If you have been cited for interfering with a lifeguard during an emergency, it is important that you discuss your case with a Los Angeles Criminal Defense Attorney as soon as possible. As a former Deputy District Attorney with over 14 years of prosecutorial experience, Los Angeles Criminal Defense Lawyer Michael Kraut is a skilled litigator who knows how to best defend those charged with offenses like this. Mr. Kraut understands that this crime may have been charged as the result of a misunderstanding and also recognizes that having a misdemeanor conviction can have significant consequences on a person’s life and future employment opportunities. Mr. Kraut works hard to make sure his clients receive the best defense possible.

For more information about interfering with a lifeguard during an emergency, and to schedule your free consultation, contact Los Angeles Criminal Defense Attorney Michael Kraut at the Kraut Law Group located at 6255 Sunset Boulevard, Suite 1520, Los Angeles, CA 90028. Mr. Kraut can be reached 24/7 at 888-334-6344 or 323-464-6453.