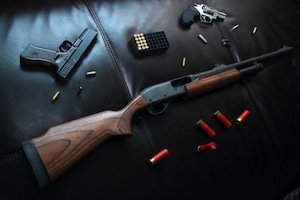 Studies have shown that many of the firearms used to commit serious felonies were obtained illegally. In order to crackdown on the illegal and unregulated sale of firearms, the California legislature has enacted California Penal Code Section 26500 PC, which makes it a criminal offense to sell, lease or transfer a firearm without a valid license.

To violate this statute, a prosecutor must be able to prove that the defendant sold, leased or transferred a firearm without a license. Under the statute a firearm would include the following weapons:

The following items are not considered firearms under the law:

Certain parties would be exempt from prosecution under California Penal Code Section 26500 PC, including the following:

In addition, even sellers who are licensed to sell firearms can be prosecuted under California Penal Code Section 26500 PC if they sell illegal firearms. Illegal firearms include certain assault weapons as well as firearms identified as generally prohibited weapons in California.

A man inherits several firearms after a family member passes away. The man does not want firearms in house so he arranges to sell the weapons at a local gun show. He does not have a license to sell firearms. This man would not be criminally liable for unlicensed firearms sales as his situation is specifically exempt from prosecution under California Penal Code Section 26500 PC.

In another example, a man operates a convenience store in a dangerous neighborhood. Knowing that many of his patrons are concerned for their safety, he decides to sell firearms in his shop despite the fact he does not have a valid license to do so. This man could be charged with selling firearms without a license in violation of California Penal Code Section 26500 PC.

4. Defenses to Selling Firearms without a License

If the defendant falls within one of the numerous exceptions under the law, he or she would not be guilty of this offense.

Additionally, there may be situations in which law enforcement agencies conduct sting operations targeting illegal gun sales. If the undercover officer becomes too aggressive in his or her solicitations or otherwise pressures the defendant into selling a firearm despite not having a license, there may be a valid entrapment defense.

Selling firearms without a valid license is a misdemeanor offense. If convicted of this offense, a defendant can be sentenced to up to six months in jail, substantial court fines and any other conditions of probation that a judge may impose. A defendant can be punished separately for every unauthorized firearm that is sold without a valid license.

6. Criminal Defense for Selling Firearms without a License Cases

If you have been accused of selling firearms without a license or have been charged criminally with this offense, it is very important that you speak with an experienced Los Angeles Criminal Defense Attorney as soon as possible. Los Angeles Criminal Defense Attorney Michael Kraut is a former Deputy District Attorney with over 14 years of prosecutorial experience who has experience in both prosecuting and defending gun cases. Mr. Kraut possesses an in-depth knowledge of California’s gun laws and works hard to ensure his clients’ rights are protected.