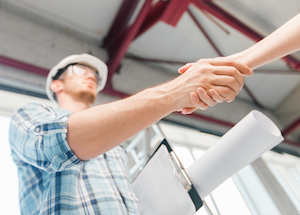 To prove that a defendant is guilty under California Business and Professions Code Section 7027.3 BPC, a prosecutor would have to prove the following:

In another example, a man is a general contractor who is fully licensed by the Contractors State License Board. For an upcoming project, he hires several subcontractors who he believes are all licensed as well. The man has collected license numbers from each of his subcontractors which he keeps on file. During an audit, it is discovered that one of his subcontractors was using a fraudulent contractor’s license number. The man would not be guilty under California Business and Professions Code Section 7027.3 BPC because he did not willfully or knowingly use a fraudulent number, as is required by the statute.

4. Defenses to Fraudulent Use of a Contractor’s License Number

Fraudulent use of a contractor’s license number is what is considered a “wobbler” crime. When reviewing the case, a prosecutor can elect to file either felony or misdemeanor level charges against the defendant. When considering what level of charges to file, a prosecutor will review factors such as the defendant’s criminal record and extent of damages suffered by the victim, if any. If charged with a felony, a defendant can potentially be sentenced to serve up to three years in a California state prison facility. If the case is filed as a misdemeanor, the maximum penalty that a defendant may face is up to a year in jail. In either case, the defendant would potentially have to pay restitution to any victim for any and all losses incurred.

6. Criminal Defense for Fraudulent Use of a Contractor’s License Number Cases

If you are being investigated for fraudulent use of a contractor’s license number, or have been charged criminally with this offense, it is critical that you discuss you case with a Los Angeles Criminal Defense Attorney as soon as possible. Los Angeles Criminal Defense Lawyer Michael Kraut is a former Deputy District Attorney with over 14 years of prosecutorial experience, during which he prosecuted white collar offenses like this as part of the District Attorney Office’s elite Major Fraud division. Mr. Kraut understands that charges like this can be devastating to one’s professional reputation and works hard to ensure his client’s receive the most comprehensive representation possible. In many cases, Mr. Kraut is able to intervene before charges have been filed in order to have the charges significantly reduced or dropped entirely.