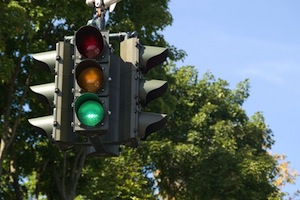 In order to ensure that roads and traffic flow in a safe and orderly fashion, the state relies on numerous devices, such as traffic lights, traffic control devices and motorist callboxes. These items serve an important function and those caught defacing or interfering with them can be subject to criminal liability. Under California Vehicle Code Section 21464 VC, defacing or interfering with a traffic control device is a serious crime that can ultimately result in a felony conviction if another person is serious hurt or killed as a result of the defacement or interference.

A man buys a mobile infrared transmitter that allows him to change traffic lights. He equips this device in his vehicle and uses it to change red lights to green as he is driving. One day the man uses the device to alter a traffic signal sequence, however the other drivers on the road are unable to adjust to the sudden change and two cars collide in the middle of the intersection. One of the passengers in the vehicles is seriously hurt as a result of this collision. This man could be charged criminally with interfering with a traffic control device under California Vehicle Code Section 21464 VC.

In another example, a couple of teenagers decide one day to knock out the power to a traffic signal located at a busy intersection. They are able to cut the power to the traffic lights, which results in an immediate collision. These teenagers could also be charged criminally under California Vehicle Code Section 21464 VC.

In another example, a man is out driving when he loses control of his vehicle. He drives off the road and hits a traffic control device, knocking out the power. The nonfunctional traffic device causes several other cars to get into serious accidents. In this scenario, the man would not be criminally liable under California Vehicle Code Section 21464 because he did not intentionally interfere with or deface the traffic control device.

4. Defenses to Defacing or Interfering with a Traffic Control Device

As described above, if the defendant did not willfully or intentionally interfere with or deface a traffic control device, he or she would not be criminally liable under this statute.

If the violation of California Vehicle Code Section 21464 VC results in the injury or death of another person, this offense is a “wobbler” that can be filed as either a felony or a misdemeanor. If convicted of this offense as a felony, the defendant can be sentenced to serve up to three years in prison. If convicted as a misdemeanor, the maximum sentence is six months in jail.

A violation of California Vehicle Code Section 21464 VC that does not result in injury or death is punishable by a fine of up to $5000. The court is required to allow the defendant to perform community service in lieu of all or part of this fine.

6. Criminal Defense for Defacing or Interfering with a Traffic Control Device

Defacing or interfering with a traffic control device is a potentially serious crime that can result in lengthy prison sentences. If you have been charged with this offense it is imperative that you consult with a Los Angeles Criminal Defense Lawyer right away. Los Angeles Criminal Defense Lawyer Michael Kraut is a former Deputy District Attorney with over 14 years of prosecutorial experience who knows how best to defend clients charged with offenses like this.

For more information about defacing or interfering with a traffic control device, and to schedule your free consultation, contact Los Angeles Criminal Defense Attorney Michael Kraut at the Kraut Law Group located at 6255 Sunset Boulevard, Suite 1520, Los Angeles, CA 90028. Mr. Kraut can be reached 24/7 at 888-334-6344 or 323-464-6453.