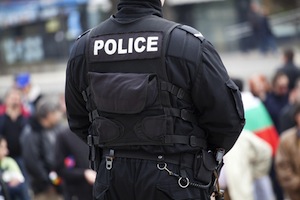 Riots are destructive events that can cause significant harm to life and property. Under California Penal Code Section 404.6 PC, it is unlawful to incite a riot, even if the defendant does not participate in the riot or actually commit a violent act as part of the resulting riot.

The crime of inciting a riot requires a prosecutor to prove the following elements:

A riot takes places when two or more people act together without legal authority to disturb the peace by using force, violence or the threat of violence and they have the immediate ability to carry out those threats.

One can be guilty of inciting a riot even where a riot does not actually occur. The defendant must actually and unequivocally urge other to commit violence. Acts such as throwing a rock would not qualify as an act that incites a riot.

At a large political protest, there is a heavy police presence observing the crowd and manning and creating barriers. Over the course of the protest, tensions between the police and the protesters have increased. At one point, one of the protesters picks up a megaphone and instructs the crowd to fight the oppressive police. This protester can be charged with inciting a riot for his call to action, even if there is no subsequent riot.

In another example, a protester at the same rally gets frustrated and starts throwing rocks at windows, which sparks the crowd into a mass riot. While he may be guilty of other offenses, the rock thrower would not be guilty of inciting a riot, as his act was not a specific call to violence.

In a final example, following an unpopular jury verdict there is a meeting at a local community center. A fiery preacher from the community addresses the large crowd and rails against the injustice of the verdict. He says that “someone ought to teach this city a lesson.” The next day, people at that meeting start a riot that results in numerous businesses being burned and looted. The preacher would not be criminally liable for inciting a riot as his words were too vague and did not prompt an immediate violent response.

4. Defenses to Inciting a Riot

As described above, there are circumstances in which a person can exercise their free speech rights and urge a crowd to take action. Inciting a riot can only be charged when there is a call to immediately commit violence. If no such immediate call to violence existed, the defendant would have a strong defense against criminal charges for inciting a riot.

Inciting a riot is a misdemeanor offense that is punishable by extensive fines and up to a year in county jail. If the defendant incited a riot in a jail or prison that resulted in serious bodily injury to another, the offense is then a “wobbler” which can be filed as a felony or a misdemeanor. If filed as a felony, the defendant can be sentenced to an additional three years in prison.

If you or someone who know have been charged with inciting a riot, it is very important that you speak with a Los Angeles Criminal Defense Attorney right away. Los Angeles Criminal Defense Attorney Michael Kraut is a former Deputy District Attorney with over 14 years of prosecutorial experience who is highly respected throughout the criminal justice system. Mr. Kraut works tirelessly to ensure his clients receive the best defense possible.