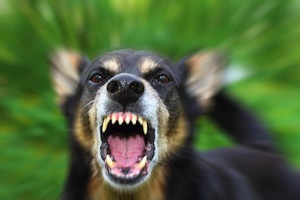 Under California Penal Code Section 399 PC, a person may be criminally liable if a dangerous animal he or she owns injures or kills another person. While this offense typically applies to dangerous dogs, it can apply to any animal owned or kept by a person.

To prove a defendant has failed to maintain control of a dangerous animal pursuant to California Penal Code Section 399 PC, the prosecutor must establish the following elements:

While wild animals are inherently considered "dangerous animals," a domesticated animal is only classified as dangerous or mischievous if its individual behavior demonstrates viciousness. While victims are required to take reasonable precautions around dangerous animals, certain classes of victims (such as children under five years old or mentally impaired individuals) are not expected to take such precautions.

A man intends to commit a burglary offense by breaking into a woman's house while she is at work. The man does not realize that the woman keeps a vicious pit bull in the house that she rescued from a dog-fighting ring. When the man climbs through her window, he is mauled by the dog and dies from his injuries. This woman could not be charged under the dangerous dog statute because she maintained proper control of the dangerous animal and the burglar failed to exercise caution around this animal. However, if instead of a burglar, a four-year-old child climbs a fence to pet a dog he sees in a yard and is subsequently injured, that dog owner could be charged under California Penal Code Section 399 PC because a child is deemed unable to take reasonable precautions around a dangerous animal.

In another example, a man owns a horse farm in the country. One day, a horse escapes the property and injures a bicyclist on a nearby hiking trail. The owner of the farm would only be criminally liable under Penal Code 399 PC if he knew that the particular horse was dangerous or had a propensity for violence.

4. Defenses to Failing to Control a Dangerous Animal

If a person does not own the dog, or was not aware of its dangerous nature, he or she would not be liable under the statute. For example, if a person is dogsitting and the dog's owner never told that person the dog was dangerous and the dog reasonably seemed docile, the dogsitter would not be guilty of this crime if that dog suddenly attacked another person.

In addition, a dog owner would not be criminally liable if the victim failed to exercise reasonable precautions around an otherwise secured animal and the victim was capable of exercising these precautions.

If the dangerous animal in questions causes the victim to die, failing to control that animal is a felony offense that can be punished by up to three years in prison. If the person attacked is seriously injured, the offense is a "wobbler," that can be charged as either a felony or a misdemeanor. If charged as a felony, the maximum prison sentence would be three years. If charged as a misdemeanor, a person can be sent to jail for up to a year. Under both scenarios, the defendant would have to pay restitution to the victim for their injuries in addition to substantial court fines.

If you or a loved one have been charged with failing to control a dangerous animal, it is critical that you meet with a Los Angeles Criminal Defense Attorney immediately. Los Angeles Criminal Defense Attorney Michael Kraut is a former Deputy District Attorney with over 14 years of prosecutorial experience who previously prosecuted serious felony offenses of this nature. Mr. Kraut works hard for his clients to ensure they receive the best defense possible.