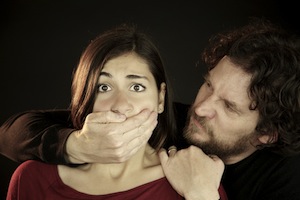 There are instances where a criminal suspect will grab another person and briefly hold them hostage or use them as a human shield to avoid an impending arrest. In California, this act is considered false imprisonment of a hostage in violation of California Penal Code Section 210.5 PC. This offense is also referred to as false imprisonment to protect against arrest.

To be convicted of this offense, the prosecutor must be able to establish the following elements:

An act is done against a person's will if that person does not consent to the act. In order to consent, a person must act freely and voluntarily and know the nature of what he or she is consenting to.

An armed man commits robbery at a convenience store. As he commits the robbery, the store owner triggers a silent alarm and the police are quickly summoned. The man does not want to be arrested so he points his gun at the store owner and threatens to shoot him if he runs away or if the police enter the store, effectively holding him hostage to avoid arrest. In addition to being prosecuted for the robbery offense under California Penal Code Section 211 PC, the man could also be prosecuted for false imprisonment of a hostage.

4. Defenses to False Imprisonment of a Hostage

A person would have a viable defense against a charge of false imprisonment if there was no immediate threat of arrest. In a case that went before the California Appellate Court, a man was charged with, among other things, false imprisonment of a hostage after he robbed a store, committed a carjacking and then took the passenger of the car and tied her to a fence. The Court held that while it was proper to convict the man for his other crimes, he did not commit false imprisonment of a hostage because a threat of imminent arrest did not exist when he tied the passenger to the fence.

There are sentencing enhancements that can add additional prison time to any sentence for this offense. If the hostage suffered great bodily harm as a result of the false imprisonment, the defendant can serve an additional six years on top of their sentence.

6. Criminal Defense for False Imprisonment of a Hostage Cases

False imprisonment of a hostage is a serious felony-level offense that can carry a lengthy prison sentence. If you or someone who know have been arrested for this offense, it is very important that you meet with an experienced Los Angeles Criminal Defense Attorney at once. Los Angeles Criminal Defense Attorney Michael Kraut is a former Deputy District Attorney with over 14 years of prosecutorial experience who previously handled major felonies. Mr. Kraut has earned the respect of judges, prosecutors and police officers alike due to his impressive legal insight and abilities in the courtroom. Mr. Kraut understands the serious consequences at stake and works hard to provide his clients with the best defense possible.