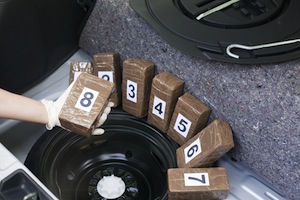 While it is generally lawful to build and use secret compartments to store valuables and other items, use of hidden compartments is illegal when used in a vehicle to conceal drugs. Under California Health & Safety Code Section 11366.8 HSC concealing drugs in a false compartment of a vehicle is a criminal offense that can lead to significant penalties for those convicted.

To prove that a defendant committed the crime of concealing drugs in a false compartment, a prosecutor must be able to prove the following elements:

A man owns a truck that has an extremely large gas tank. The man decides to use the truck’s gas tank to conceal marijuana while transporting it. In addition to being charged with possession for sale of marijuana, the man could be charged with concealing drugs in a false compartment in violation of California Health & Safety Code Section 11366.8 HSC. The fact that the compartment was not added to the vehicle would not preclude criminal prosecution, as the false compartment does not require modification.

In another example, a mechanic runs an auto body shop that specializes in after-market modifications. A man approaches the mechanic at the shop and asks him to install various hidden compartments throughout his vehicle to help him conceal drugs when he travels throughout the state. The mechanic complies and builds the compartment according to specifications. The mechanic could be charged under California Health & Safety Code Section 11366.8 HSC for building a false compartment for use in concealing drugs, as this action violates the statute.

4. Defenses to Concealing Drugs in a False Compartment

The act of building a false compartment to store drugs is always a felony-level offense. Those convicted can be se sent to prison for up to three years.

6. Criminal Defense for Concealing Drugs in a False Compartment

If you or someone you know are being investigated for concealing drugs in a false compartment, or have been charged criminally with this offense, it is crucial that you speak with a Los Angeles Criminal Defense Lawyer right away. As a former Deputy District Attorney with over 14 years of prosecutorial experience, Los Angeles Criminal Defense Attorney Michael Kraut knows how to effectively fight all varieties of drug crimes. Mr. Kraut is well-known throughout the court system as an aggressive litigator who works hard to ensure the best possible outcome for his clients.

For more information about concealing drugs in a false compartment charges, and to schedule your free consultation, contact Los Angeles Criminal Defense Attorney Michael Kraut at the Kraut Law Group located at 6255 Sunset Boulevard, Suite 1520, Los Angeles, CA 90028. Mr. Kraut can be reached 24/7 at 888-334-6344 or 323-464-6453.